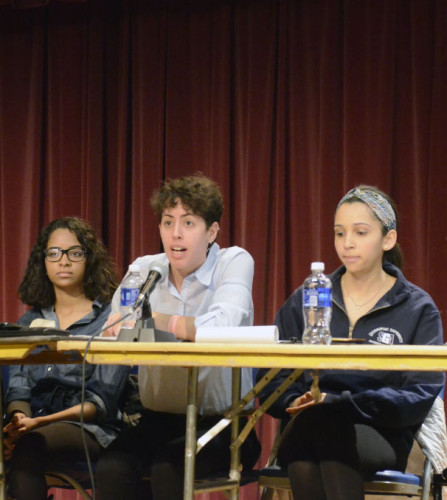 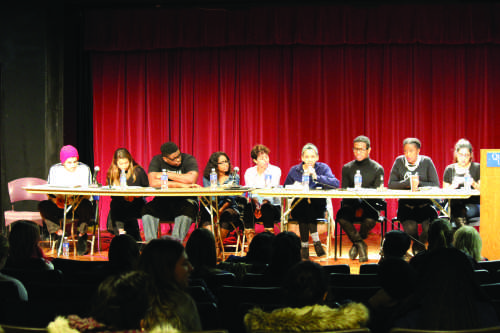 Students and faculty members gathered in the Buckman Theater on Friday, Dec. 4 for a discussion on safe spaces. This hour-and-a-half long discussion was centered around a panel of speakers, all of whom represented different organizations and parts of campus. These panelists included members from GLASS, NAACP, Residential Life, international students, among others. There were also members from The Chronicle. However, they did not represent The Chronicle while on this panel.

The discussion started off with one of the coordinators, junior Ruth Onyirimba (who is a Chronicle member), asking the panelists to define what a safe space means to them. Each student had a different meaning for a safe space, ranging from “a place where people who are underrepresented to come together so they can share each other’s experiences, feel a sense of empowerment” to “a space you can go to comfortably share your ideas and beliefs” and even just “a group of people who you feel comfortable with.”

After establishing what a safe space means to the panelists, the conversation transitioned into discussing Chronicle Managing Editor Sarah Harris’ opinion piece titled “Stop Demanding Safe Spaces,” giving a chance for Harris to explain her article to those who had not had a chance to read it.

“The reason I wrote this is because of recent events that have been going on at colleges and universities,” Harris said. “The fact that this safe space idea seems as though it’s only for a certain amount of people.”

After Harris explained her article, senior Isaiah Lee was given the opportunity to respond in lieu of the videos he has made and published on Facebook as a response to Harris’ article.

After Lee spoke about his discontent with Harris’ article, panelists were then asked to share why they need safe spaces.

“I never had a safe space in high school,” junior Alexi Mangili said. “Coming here, I was able to find that safe space and be who I am today so saying that I don’t need a safe space is really hurtful for me.”

Senior Lindsay Banks, who is the Student Government Association vice president for student experience and half-black and half-white, agrees with Mangili’s experiences with safe spaces.

“I look back and realize that I didn’t necessarily have a lot of shared experiences with people that we in the dominant environment that I was a part of,” Banks said. “I think that safe spaces to me are not necessarily to sit there and fester, but are kind of to sit there and build together and I think it’s kind of the idea of growing together so you can assimilate into the bigger world that you’re going into.”

In addition to students responding to how they felt about safe spaces, Associate Professor of Psychology William Jellison, also shared his experiences on Quinnipiac’s campus.

“As a gay man here on campus, somebody who has been out for many years and very, very comfortable with who he is, still feels this identity issue on a daily basis,” Jellison said. “I have a very supportive department and I feel very supported here but at the same time, I still think about what I say and I still censor what I say and I’m concerned about how I articulate something and how it comes across because I am a member of the minority group.”

Jellison stressed the fact that safe spaces are ultimately about giving every individual what they need in order to feel comfortable with their own identity.

Harris responded to this by sharing her experiences as an RA and what a safe space means for her and her residents.

“Safe spaces aren’t for minorities. They are for marginalized groups who don’t have representation or are kept out of spaces,” Lee said. “We keep making this into this idea of society resetting.”

Later in this discussion, Harris adds on to the conflict that RAs face.

“As an RA, I would never say that racism should be going on in my residence hall, but what I’m saying is that I cannot control the way people think or why they think that way,” Harris said. “I do not encourage people to say homophobic or racist things in my hallway. I encourage them to talk to each other and respect each other for who they are.”

Mangili responds to Harris’ comment in regards to what a safe space for her residents should be.

“By doing what you’re saying and creating an accepting space, that is a safe space” Mangili said. “Yeah you can’t change their opinions, but you can prevent their opinions from hurting other people, and that’s what the issue with safe spaces is.”

The remainder of the panel consisted of a series of questions posed by the audience to both specific panelists, as well as the entire panel as a whole.

Some of the questions that were asked were regarding Harris’ experiences as an RA, how a safe space relates to the concept of freedom of speech and how we can make people who identify as part of the majority feel more inclined to comment on safe spaces, without fearing exclusions or threats.

At the end of the panel, moderator and Assistant Professor of Sociology  Professor Lauren Sardi, thanked students and faculty for coming to the talk and encouraged professors who would like help creating a safe space in their classrooms to reach out to her, stressing how important it is for students to feel safe and comfortable within their classrooms.