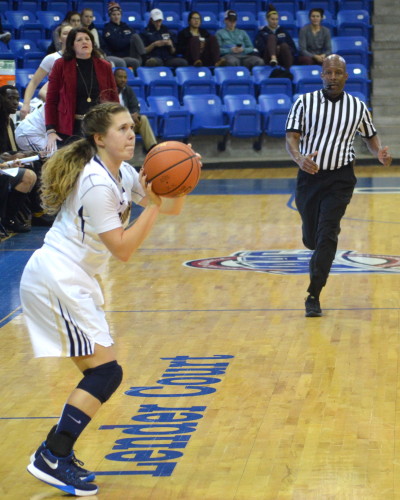 Despite forcing their opponent to turn the ball over 35 times, Quinnipiac women’s basketball (4-4, 0-2 MAAC) could not figure out a way to defeat the Manhattan Jaspers (4-4, 2-0 MAAC) on Sunday afternoon, losing 52-42 at the TD Bank Sports Center.

After shooting 17-62 (27%) from the floor and scoring a season-low 47 points in a nine-point defeat to a win-less Marist team, the Bobcats offensive struggles continued for the full 40 minutes against Manhattan. During Sunday’s contest, Manhattan held Quinnipiac to 16-75 shooting from the field (21%). 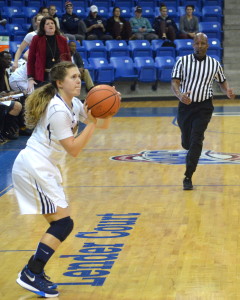 Head coach Tricia Fabbri thinks the offensive struggles are a result of a lack of confidence.

“Offensively, we’re just not believing in our shot and really struggling to score,” Fabbri said. “It’s contagious with this young team just not making a shot.”

Veterans Maria Napolitano and Adily Martucci went a combined 4-23 from the floor. Edel Thornton scored eight points on 3-11 shooting. Both Sarah Shewan and Carly Fabbri combined for 0-14 in the loss.

None of the players were available after the game.

Despite the poor shooting performance, Quinnipiac remained in the game and even led with 5:35 to play in the third quarter.

The Bobcats remained scoreless for most of the run, not scoring their first basket of the fourth quarter until there was 3:38 to play.

In the loss, there was a wide discrepancy of free throws.

Manhattan took 30 free throws, sinking 23. Quinnipiac drew 11 free throws, while making five. But, Fabbri did not think the discrepancy contributed to the loss.

“We did not put the ball in the basket,” Fabbri said. “We didn’t help our own cause today.”

Despite struggling offensively, the game was not without positives. The Bobcats defense played well, as they would force 20 steals and a block a pair of shots.

“We do the hard part really well and the fun part has become really tough for us,” Fabbri said. “It’s tough to watch us struggle.”

Up next for Quinnipiac is a trip to Northeastern on Dec. 9. Fabbri said she thinks the days off will help and are coming at a good time.

“We get a couple of days to concern ourselves with ourselves and try and build some confidence.”