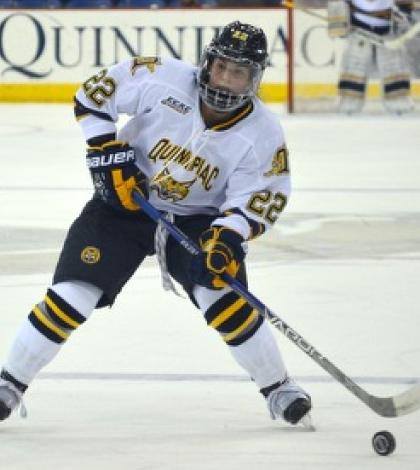 Few games carry more weight for the Quinnipiac women’s ice hockey team coming into this season than contests against the Harvard Crimson. While the teams had matched up four separate times last year, including in both the ECAC and National tournaments, the Bobcats came up empty handed every time. In fact, the last time Quinnipiac had defeated Harvard was all the way back on November 12th, 2010. 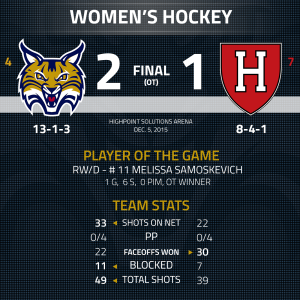 This time out, Quinnipiac would finally flip the script.

In a tightly contested game that needed overtime to determine a winner, Quinnipiac downed Harvard 2-1 at High Point Solutions Arena on Saturday afternoon.

“There is no question that from the beginning of the season, Harvard was a game we circled on the calendar, especially given that they were the team that ended our season last year,” Quinnipiac head coach Cassandra Turner said. “It was really neat to see how genuinely excited our seniors were following that win. Kristen Tamberg was in tears following that win, she was so happy, as it was their first victory over Harvard.”

Coming into the game, the Bobcats were dealing with fatigue from the night before – when they defeated Dartmouth 7-1.

On the way to the victory, Quinnipiac accumulated many injuries to its defensive core, forcing the coaching staff to play standout freshman Melissa Samoskevich as the team’s 7th defender. While Samoskevich played the first two periods of the game as a defender, she would revert to forward for the third period and overtime on Saturday.

Eventually, she netted the game-winning goal.

“I haven’t played as a defender in three years, so it took me a little while to get used to it,” Samoskevich said. “I’ve done it before though, and it actually gives me a bit of an adrenaline rush.”

Both teams threatened in period No. 2, but the Bobcats 1-0 lead remained intact heading into the final frame.

Harvard almost tied the game 7:30 into the third period, but a spectacular stretching save from Rossman kept the game scoreless. 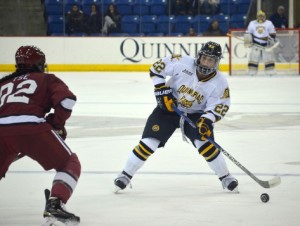 Harvard’s offense continued to press though, and it paid off as Karly Heffernan put a rebound shot past Rossman to even the game at 1-1.

In overtime, both teams would came out firing and looked to seal a victory.

After T.T Cianfarano had a shot on net blocked by the Harvard goaltender, Samoskevich corralled the rebound and placed it in the back of the net for the victory.

With today’s victory, the Bobcats have gone undefeated over their last 10 games. Quinnipiac improved its record to 13-1-3 on the season and 7-1-2 in conference play. Quinnipiac will now turn its attention to the University of New Hampshire, as the Bobcats are set to host the Wildcats at High Point Solutions Arena on Dec. 11th.