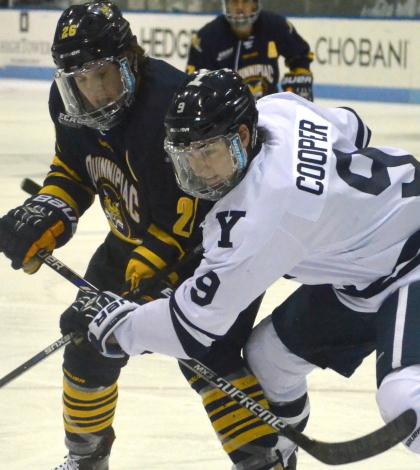 The Battle for Whitney Avenue between Quinnipiac and Yale is usually celebrated as a cross-town rivalry. However, Friday night proved to be a night that memorialized individual achievement.

No. 3 Quinnipiac’s 3-0 win over No. 10 Yale on Saturday at Ingalls Rink put Quinnipiac senior goalie Michael Garteig in a new class. The win was Garteig’s 60th career win, propelling him past J.C. Wells (’01) and Jamie Holden (’05) for No. 1 on the program’s all-time wins list. Although the accomplishment has his name on it, Garteig gave the credit to the players around him.

“I’ve been lucky to play for some pretty awesome teams here at Quinnipiac and have been fortunate enough to be in net for those wins,” Garteig said.

Garteig, the Hockey Commissioners Association National College Hockey Player of the Month for November, made 22 saves for the Bobcats in the victory to earn his fifth shutout of the season. He saw progressively more shots as the game went on and continued to keep the Bulldogs out of the net. He preserved the shutout by making a kick save on a shot from John Hayden in the second period and kept out a breakaway opportunity from Ted Hart in the third.

“I thought [Garteig] played great tonight,” Quinnipiac head coach Rand Pecknold said. “We’re happy with how he plays. He battles and we feed off that battle level.”

The 22-save shutout continued to improve Garteig’s senior year statistics. He now boasts a 1.20 goals allowed average (GAA), .85 better than he allowed his junior year, and a .949 save percentage, .032 better than he did his junior year. Although Garteig credited the team for his all-time wins accomplishment, Pecknold credits Garteig for his effort in net.

“I’m proud of him,” Pecknold said. “It’s hard. I say it all the time, we feed off him. His battle level is phenomenal.”

Quinnipiac got on the board first just a minute and a half into the second period after a scoreless first. Soren Jonzzon sent the puck to Tim Clifton, who shot the puck into the open left side. The goal was Clifton’s ninth in the 12 games he has played in this season.

Quinnipiac then got a quick goal to start the third period, too. Landon Smith brought the puck up the right side with Sam Anas streaking along the left. When Smith saw Yale’s All-American goalie Alex Lyon favor Anas’ side, he fired it over Lyon’s near shoulder to put Quinnipiac up 2-0.

“[Travis] St. Denis made a great play on the wall,” Smith said. “I picked it up, I looked at Sam on the back door and I saw the goalie cheating a little bit so I just put it in.”

The goal was Smith’s third of the year, each one coming on the road. Pecknold said he wants Smith to take more chances on net.

“That’s a big time goal,” Pecknold said.”[Smith] has one of the best releases in the country. We want him to use it more, shoot the puck if he feels open.”

Devon Toews put the dagger in the game with two minutes left in regulation with his third goal of the season. He took a shot streaking it up the left side, got the rebound, and wrapped around the Bulldogs’ net to put Quinnipiac up 3-0.

The Bobcats travel to Providence tomorrow to play Brown, a game that has tripped up Quinnipiac in the past. The Bobcats are 2-2-1 against the Bears in their last five matchups and trail the all-time series 15-7-6.

“We have a tough time in that rink,” Pecknold said. “We won there last year. We have a lot of character. We have to find a way to figure it out and really have a good first period. That’s going to be important.”