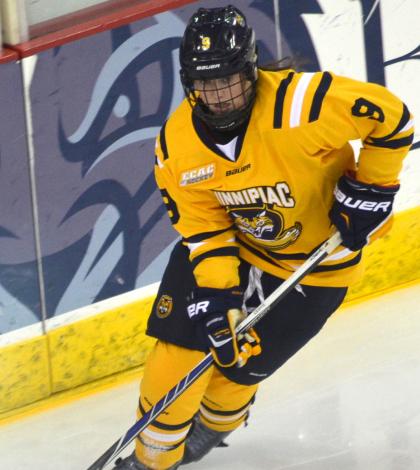 The Bobcats outshot Dartmouth 29-22 and dominated puck possession. Dartmouth received little help from goaltender Robyn Chemago, who posted a .750 save percentage in the game, allowing seven goals on 29 shots. 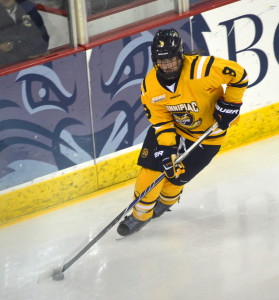 Sydney Rossman continued her run of form for Quinnipiac in the net, while stopping 20 of 21 shots she faced on the night.

Rossman’s performance has been stellar lately. The goal she allowed to Laura Stacey marked the end of a program-record shutout streak of 296 minutes and 42 seconds.

“I know that Chelsea Laden and Victoria Vigilanti would be really proud and excited for her as well,” Turner said.

Taryn Baumgardt and and Melissa Samoskevich contributed to the Bobcats’ victory with 2 goals each. Baumgardt also notched an assist to cap off her three-point game.

“She’s been my [defensive] partner for three years so I couldn’t be more proud,” Cydney Roesler said of Baumgardt’s performance.

Kristen Tamberg also contributed to the win, scoring her first goal of the season on a hard wrist shot from the left faceoff circle with 16:21 remaining in the first. Tamberg’s goal was scored on the power play.

The power play was a crucial tool for the Bobcats as they converted on three out of five of their power play opportunities.

However, one of the main points of emphasis going into today’s game according to coach Turner was the penalty kill.

“We really, really zeroed in on Dartmouth’s power play today,” Coach Turner said. “We knew that was a strength of theirs and we wanted to be sure that we were sharp and we did that.”

The Bobcats didn’t give up a single goal on five Dartmouth power play opportunities, shutting down Dartmouth’s power play completely.

The Bobcats will attempt to extend their winning streak as they host Harvard at 4 p.m. on Saturday in Hamden.
[twitter-follow username=”Sam_DaCosta_9″ scheme=”dark”]