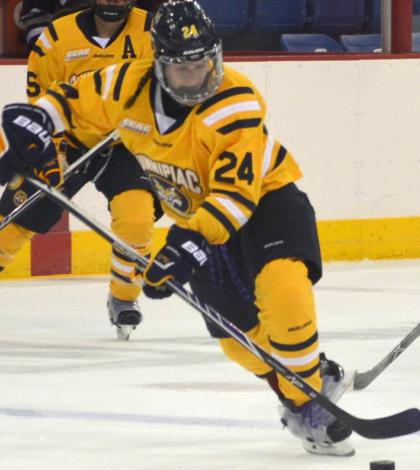 Coming off a shutout victory against Yale University to seal a third-straight Nutmeg Classic title, Quinnipiac women’s ice hockey is set to face off with Dartmouth on Friday evening at 7 p.m. in an ECAC matchup at High Point Solutions Arena.

The Dartmouth Big Green are entering the game following consecutive losses to No. 1 Wisconsin, losing by a combined 8-1 margin. These two contests brought Dartmouth’s record to 4-4-2 overall, and 4-1-2 against ECAC competition.

Meanwhile, Quinnipiac enters today with a 5-1-2 record against conference opponents. This will be the first time that the Bobcats and Big Green are facing off against each other this season. In the Dec. 4 standings, the Bobcats are on top of the ECAC with 14 points, while Dartmouth sits at third with 10. 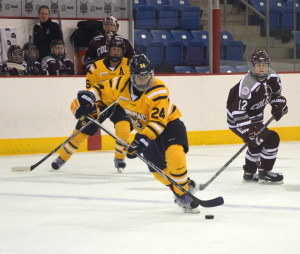 The Bobcats will not only look for more solid play from reigning ECAC goaltender of the month Sydney Rossman, but also from forward Taylar Cianfarano. Cianfarano has netted seven goals in the last five contests for Quinnipiac, enroute to winning ECAC player of the week.

Overall this season, Cianfarano leads the Bobcats in scoring with 23 points (15 goals, 8 assists, as well as boasting a plus/minus rating of +20.

As for the Big Green, they will look for continued excellence from their stars to spark an upset. Lindsey Allen and Laura Stacey have been the most consistent contributors for Dartmouth this season, as the two have combined for 17 points in seven games against ECAC opponents.

Dartmouth goalie Robyn Chemago has been extremely solid in divisional play, boasting a .952 save percentage along with averaging only 1.02 goals against in seven games played.

The last time these two divisional opponents squared off was in early January of last season, where the Bobcats would hold off Dartmouth 3-1. Earlier that season in December, a late goal by Dartmouth brought the score to 4-4 where the game would end in a tie.