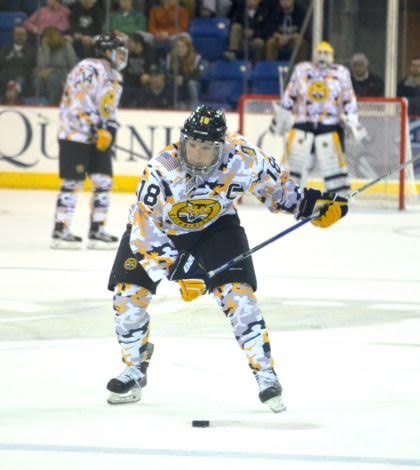 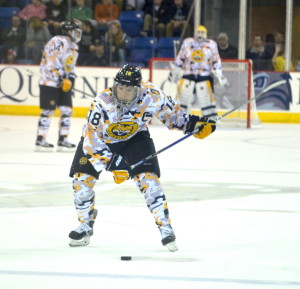 No. 3 Quinnipiac men’s ice skated to a tie with ECAC rival No. 20 Clarkson at High Point Solutions Arena on Friday evening, ending Quinnipiac’s win streak to begin the 2015-16 tilt.

“We lost this game on Wednesday and Thursday in practice,” Quinnipiac head coach Rand Pecknold said. “We did not prepare for this game. Everyone coming in wants a piece of us and we have to be ready to go.”

The Bobcats struggled finishing their chances in the first period. Quinnipiac had numerous wide open opportunities to score, but could not find the back of the net.

On the other side, Clarkson was able to jump on Quinnipiac early by creating numerous scoring opportunities by screening Bobcats goaltender Michael Garteig in front of the net.

This tactic proved to be effective, as the Golden Knights were able to strike first when Janick Asselin was able to sneak a puck past Garteig after a battle in front of the net, giving Clarkson a 1-0 lead with 3:21 remaining in the first period.

There was no scoring in the second frame, but the chippiness of the game increased.

After the horn sounded to signal the end of the the period, the two teams got involved in a scrum which resulted in a roughing penalty and a 10-minute game misconduct penalty for Bobcats co-captain Travis St. Denis, resulting in his ejection.

“It was a physical game,” captain Soren Jonzzon said. “Part of it was because we weren’t playing well and were frustrated. Because of that there was some chippy stuff that we shouldn’t have been part of.”

The Bobcats came into the third period with what seemed like a breath of newfound life and were able to get onto the scoreboard early on and tie the game after Luke Shiplo sniped one into the back the net from the high point. K.J. Tiefenwerth and Tanner MacMaster were credited with the assist.

“I think we came out not ready to go,” Jonzzon said. “They outplayed us in the first two periods. We played well in the third period but we can’t play well for 20 minutes and expect to win a game.”

The two teams played strong defense throughout the third period and overtime and the contest would result in a stalemate at 1-1.

“It’s great we came back, but I am disappointed in our effort,” Pecknold said. “I thought we played selfish and unlike ourselves. We are a selfless team and that’s how we win.”

“I think Clarkson did a great job of creating our selfishness,” Pecknold continued. They were clutching and grabbing, and banging and whacking. Our guys got frustrated and we can’t do that. They took us out of our game tonight.”

The Bobcats are back in action on Saturday as they play host to No. 14 St. Lawrence University at 7 p.m.