Music for Meals rocks for a cause 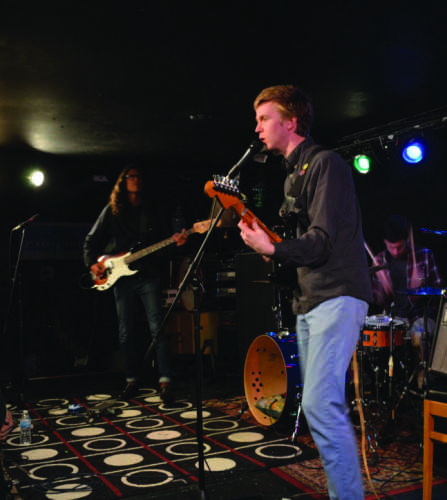 WQAQ hosted its annual Music For Meals concert on Friday, Nov. 13. Attendees could either donate two cans or pay $5, which is a pretty good deal considering eight cans for four people came to around $5. Cans were donated to the Hamden Food Bank. The artists that played were Caleb Cordes, Strange Kids, Pinegrove and Donovan Wolfington. 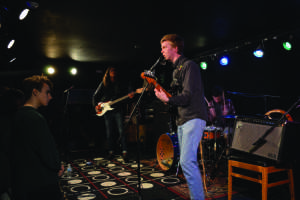 The show was at The Space, a unique venue that frequently hosts a mix of local acts and more popular bands. The crowd was on the smaller side; interestingly not many Quinnipiac students showed up to the student-run event. A lot of locals came out and supported the diverse group of bands.

Caleb Cordes from a band called Sinai Vessel played a very honest acoustic set. He shared extremely personal stories between songs about his grandfather who had passed away and expressed multiple times how thankful he was for the crowd listening to him. Cordes was very humble and had raw, yet soothing vocals that kicked off the night in a strong way.

Strange Kids from Watertown took the stage next. The all-male quartet had a fun rock sound and edgy personalities. Strange Kids played in WQAQ’s Spring Fest earlier this year and gave an equally impressive performance. The band had advanced guitar skills and overall sounded musically very well done, despite having a new drummer.

Pinegrove, a trio from Montclair, New Jersey, was the second billed band and played the most likable and interesting set. Pinegrove played at The Heirloom Arts Theater in Danbury on Oct. 26 and stole the show. The high hopes for their return to Connecticut was met with a memorable and well done set. Vocalist Evan Hall’s subtle quirkiness shone through the indie rock sound. Pinegrove played a mix of faster songs, mid tempo tracks and even had their hit ballad “&” in the mix. The crowd was very responsive to the band’s catchy sound and those who were familiar with the band sang along passionately to every word.

The headliner Donovan Wolfington, from New Orleans, Louisiana, had a completely different sound than the rest of the bands. The quartet was louder, heavier and had a more aggressive sound. The vocalist’s parents were even hanging out in the back of The Space at a table, cheering when their son gave a shoutout to them. The angsty punk sound pulled the crowd in and the audience had the most energetic passion for the set. Donovan Wolfington released “How to Treat the Ones You Love” back in August 2015 on Topshelf Records and played a few tracks from the album.

What was interesting about all the performances was that all of the members of each of the bands were listening in the crowd and supporting each other. They sold their own merchandise, set up all their own instruments and were very friendly to the audience. Their humbleness gave a feeling of comfort and camaraderie throughout the night. Though the event didn’t have a ton of attendees, the environment was good and the music was better.