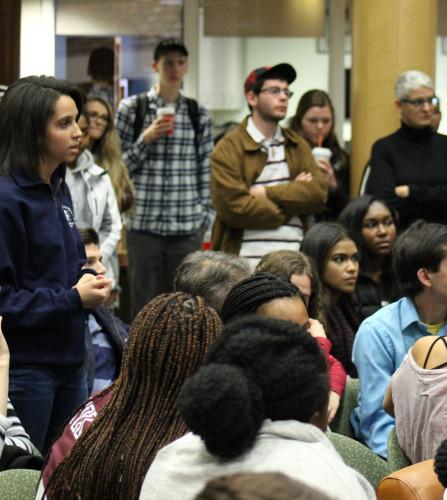 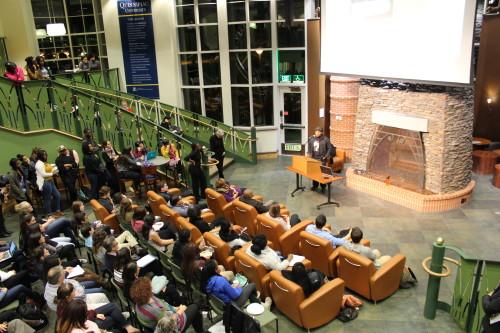 Undergraduate students, graduate students and several members of the faculty and staff crowded the Piazza and the second floor of the Carl Hansen Student Center on Tuesday, Nov. 17 for a discussion titled “A Place at the Table: from Mizzou to Yale.”

Although President Lahey could not attend due to a prior commitment, Executive Vice President and Provost Mark Thompson was there as a spectator, urging attendees to take advantage of this opportunity to speak up about any and all racial injustices they witness on campus.

“I’m a proponent of continuous improvement,” Thompson said. “We still have more to do. I encourage us as a community that values every one of its members to continue to collaboratively work together for our individual collective benefit.”

To begin, Jean-Jacques presented attendees with a list of rules that were intended to create and encourage an effective discussion. Some of these rules included showing respect toward one another’s opinions, fostering open and honest communication and giving everyone in the room an equal opportunity to speak their minds. 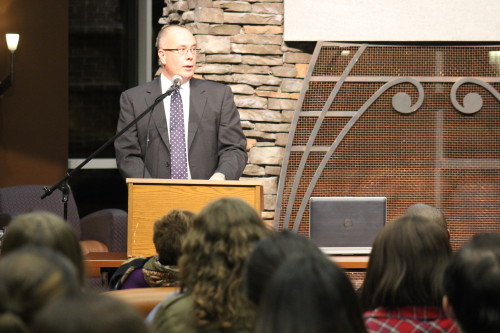 After establishing these rules, attendees were shown a video that provided an overview of the events that have occurred in the last few weeks at the University of Missouri, Yale University and Ithaca College. This video showcased protests regarding racial tensions on the three campuses and set the stage for the discussion.

The first question to start off the discussion was prompted by Jean-Jacques.

“What are some of folks’ general reactions to what’s happening at Mizzou and at Yale? How are folks feeling?” Jean-Jacques asked.

From there, the discussion turned into somewhat of a Socratic-format. Students began to speak up and express their feelings about the events happening on college campuses such as University of Missouri (also known as Mizzou) and Yale, emphasizing their discomfort and disapproval for the way people of color are treated.

Several students brought up the issue of safety and its correlation to education. Many argued that it seemed unfair to have to choose between feeling safe versus getting an education and that these two should go hand-in-hand.

More students went on to share their experiences in the classroom in regards to ways in which they felt underrepresented and looked at as inferior, simply because of their skin color. People’s stories included being told that they were not literate, being asked to speak for their entire race’s reaction to a topic and being met with shock when they do or say something that does not align with stereotypical views of their race.

Jean-Jacques also brought up the role of the media, asking attendees “what role [they] think the media plays in terms of perpetuating racism and in terms of the misinformation that the people are receiving?”

One student said that it’s important for us as a whole to actively seek both sides of every story. She claimed that the media has a very powerful role in terms of the way that information is shared with the general public. She also said it is up to the public to then look to a variety of different sources and develop their own view on an issue rather than choosing just one and wholeheartedly believing it.

Senior Ariana Stover attended the discussion and said hearing about what others have dealt with made the experience worthwhile.

“I’ve always felt this apathy from a lot of Quinnipiac students regarding racial discussions,” Stover said. “This discussion gave many the opportunity to hear from the students that care. I got to hear about students’ experiences with racism and microaggressions, about the feelings of being unwanted on campus. We must work on making Quinnipiac a more inclusive place.” 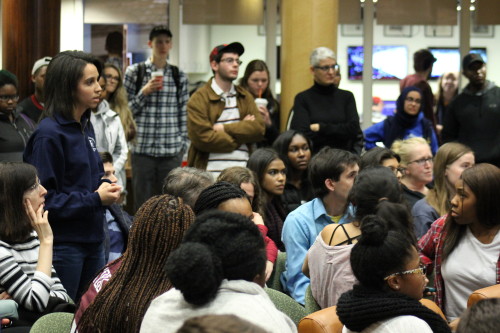 Toward the end, the discussion became more focused on Quinnipiac and less about other college campuses.

Multiple students said most people get uncomfortable when race is brought into a conversation and tend to avoid it. Students also said they would expect that the Student Government Association could make racial inclusion more common on our campus.

Students who acknowledged that Quinnipiac students do not like to talk about race also said conversations about race are necessary if there is ever to be a change on campus.

“We need to get comfortable with being uncomfortable,” senior Isaiah Lee said. “Until we get uncomfortable, the real conversations will never happen.”

The conversation went on for more than three and a half hours, and some students stayed in the Piazza to continue their discussion after the event ended.

Jean-Jacques said the night was a success, but was uncertain whether it will leave a lasting effect.

“I think it’s hard to say whether or not it’s had an impact on a majority of the people that were here but I certainly hope it did because I think people were sharing some great things, their thoughts, their opinions and their experiences on and off this campus,” Jean-Jacques said. 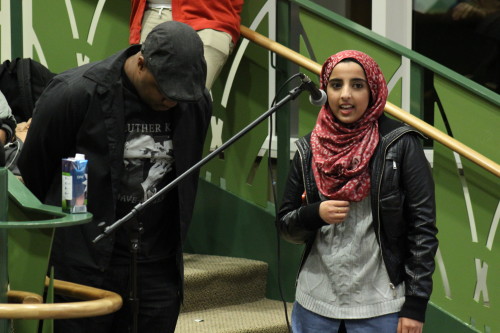