Mother of Sandy Hook victim encourages students to have fun 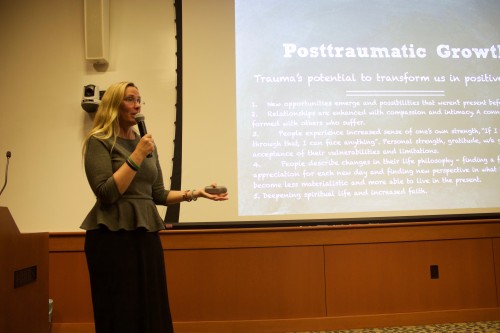 Scarlett Lewis, mother of Jesse Lewis, a victim in the Sandy Hook Elementary School shooting, gave her presentation “Choosing Love” to an auditorium full of students and Hamden and North Haven residents on Tuesday, Nov. 17.

Before she began, Lewis challenged the audience, requesting that they rethink any uncomfortable feelings or thoughts they have during the presentation.

“Instead of fearing this uncomfortable feeling or something personal that comes up, I challenge you to sit with [the feeling] in love,” she said.

The request was at the core of the message she was there to spread, and has devoted her life to spreading since the tragic day of Dec. 14, 2012. In fact, the message is one of “nurturing, healing and love” that came from her son, Jesse.

Jesse was born at 11 pounds. As described, he kept this larger-than-life persona with him throughout his life. He was a goofball; always energetic, loud and happy. On Dec. 14, Jesse was courageous and instrumental in saving nine of his classmates lives by telling them to run away, according to Lewis.

Though Lewis did not go into the details of that day, the New York Daily News said six-year-old Jesse told nine of his classmates to run away as Adam Lanza–the man charged with killing 20 children and six staff members at Sandy Hook Elementary School in Newtown, Connecticut–reloaded his gun.

Though Jesse did not survive, the bravery that he displayed showed Lewis what it really meant to be courageous–which to her meant being kind and gentle, being grateful, doing things that are uncomfortable but right, and forgiving.

Lewis said courage is what allowed her to re-enter the home that she had raised two boys in for years as a single mother after losing Jesse. Without that courage, she wouldn’t have found the message Jesse had written on her kitchen chalkboard. The message being those three words “nurturing, healing and love.”

From the definitions of those three words, which are gratitude, forgiveness and compassion, she was able to come up with the formula for choosing love. Each of which she talked about and were main points in her presentation.

Lewis discussed compassion as something she learned had two components. The first is empathy or identifying with someone else’s pain. The second, and more profound component is the action.

Similar to compassion, Lewis discussed the forgiveness component that is equally important.

“I learned that forgiveness is for yourself, forgiveness sets you free, it keeps you from being another victim,” Lewis said.

Beyond these two components the rest of her presentation moved all those in attendance and changed the way many will think and process thoughts going forward, such as freshman Callahan Brock.

“Personally, what I take away is how to think,” Brock said. “The only way people can achieve happiness is if they believe that they are… If we learn how to forgive, choose love over hate and anger, we might live better lives.”

Likewise, North Haven resident Karen Delvecchio was inspired by the presentation and commended Lewis for her courage.

“It really brought to mind a lot of things that happen to me during the day that I could be upset or angry about and I’m going to look at differently.” Delvecchio said, “I’m really going to come away from this with a different attitude.”

All of Lewis’ work is through the charitable foundation she started under her son’s name which is the Jesse Lewis Choose Love Foundation.

The foundations and her personal goal is to “make sure every child has access to social and emotional learning.”

For more information on the foundation or to donate visit jesselewischooselove.org.

As she closed the presentation she left all those in attendance with a simple message to live by and spread and that is to “have fun, have a lot of fun.”