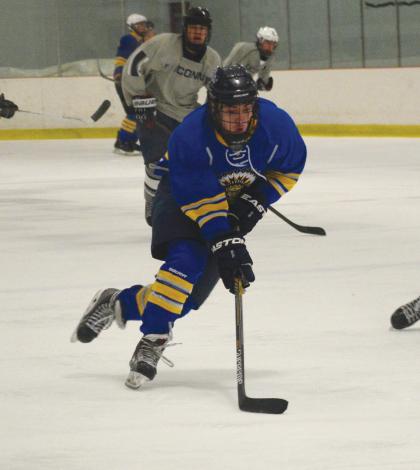 In a game that seemed like it was nothing but Braves’ goals, the Braves Hockey Club topped UConn 10-5 Sunday night at the Northford Ice Pavilion.

A late burst in third period from the Huskies would not prove strong enough, as good special teams play from the Braves countered several late penalties. 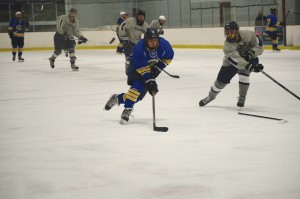 “It’s been a little up and down, tonight it was working well,” said Braves head coach Richard Conte about the power play and penalty kill. “That’s been something we’ve been working on all season, trying to get the guys to be more aggressive on that penalty kill.”

The Braves struck first after numerous chances halfway into the opening period, when senior forward Colin Fay lifted a hard wrist shot over the right shoulder of the Uconn netminder. It did not take Fay’s line long to score again, as one of his wingers, Bryan Lynch, powered a shot off the goalie and into the net about a minute later.

Fay’s line created many chances throughout the contest, and the line ended up with 4 total points.

“We’re getting a lot of the pucks to the net, which is key,” senior forward Evan Jackson said. “It starts from good defense, but we’re definitely pressing down low so it worked out for us.”

The next goal came on the man advantage for the Braves, with a slapshot from the point for defensemen Stephen Neal, making the score 3-0 in favor of the Braves with about 5 minutes left in the first.

About four minutes following the power play goal, Braves forward Cam Curley would notch his first of two goals on the evening, taking it by himself over the blue line and ripping the puck top left from the slot.

Pressure and shots on net by the Braves from the beginning of the second period proved to be too much for UConn about 5 minutes in when forward Jake Healey sped into the zone and dropped a pass back to a trailing Alex Posillico for a one-timer.

Following the game’s theme, good passing and positioning by the Braves led to a tap in goal on the right side from captain Sean Simons gave the Braves a 6-0 lead.

With about nine minutes left in the period, the Huskies finally got on the board on a breakaway, lowering the deficit to five.

Following the UConn goal, Peter Beckwermert scored two straight goals for the Braves, making it 8-1 by the end of the second period. Beckwermert ended up with four points in the contest.

The Huskies found their scoring touch in the final period as they would tally three straight scores to cut the Quinnipiac lead in half at 8-4.

“We just had to keep our heads,” Jackson said. “We had to stay out the box, but in the end it worked out for us.”

Cam Curley ended UConn’s scoring onslaught after he scored the Braves first goal of the third period, bringing the advantage back up to five.

The Huskies scored again with about three and a half minutes left, but it was too little too late for the Huskies. Evan Jackson scored with 10 seconds remaining to seal the deal for the Braves at 10-5.

Following the win, the Braves improved their record to 3-10 on the season and will head to Babson this Saturday for their final matchup of the semester.