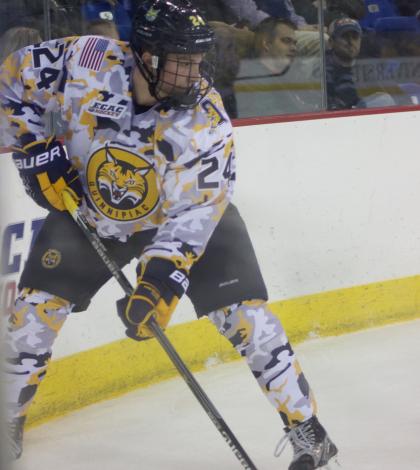 After a physical game that saw plenty of penalty minutes, Quinnipiac men’s ice hockey defeated Dartmouth by a final score of 6-2 at the High Point Solutions Arena on Saturday evening.

“I think the physicality for the most part favors us,” Bobcats Captain Soren Jonzzon said. “We aren’t a huge team but we’re pretty aggressive and we like to play an in-your-face game where we take away time and space.”

Along with the physicality came a lot of penalties. Quinnipiac registered four penalty minutes while Dartmouth registered 15. 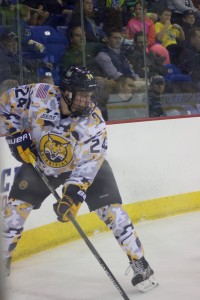 “I don’t know if we were that disciplined… but I think we stayed out of the box enough,” Quinnipiac head coach Rand Pecknold said. “It was a chippy game, Dartmouth was playing hard and we were playing hard and things escalated a little bit but I thought the officials did a pretty good job kind of getting it under control.”

Despite all the opportunities, the Bobcats’ power play started 0-3 and struggled to generate scoring chances until Dartmouth’s Brett Patterson received a five-minute major penalty and a game misconduct for hitting from behind.

From there, Quinnipiac’s power play started to come together. The Bobcats capitalized on the five-minute power play giving themselves a 4-2 lead after stringing together several passes through the offensive zone to find Tim Clifton wide open for a tap-in goal with 28 seconds remaining in the second period. K.J. Tiefenwerth and Andrew Taverner registered assists on the play.

Sam Anas scored on a hard, one-timed slap shot from the left faceoff circle before Patterson’s penalty expired 31 seconds into the third period, giving the Bobcats a 5-2 lead. The goal, assisted by Devon Toews and Travis St. Denis would be the 51st career goal for Anas.

“We were really getting outworked on our power play and that’s uncharacteristic of us,” Anas said. “We still have to work hard and win battles and win races on pucks and good things will come our way when we do that.”

The Bobcats finished two-for-seven on the power play.

“We don’t run around and kill people,” Pecknold said, “but we want to make sure we finish our checks and get a bump so that players can’t get back into the play. I think we’re a better team when we’re physical.”

The Bobcats are back in action Tuesday, when they travel to take on the UConn Huskies. Puck drop is set for 7 p.m.