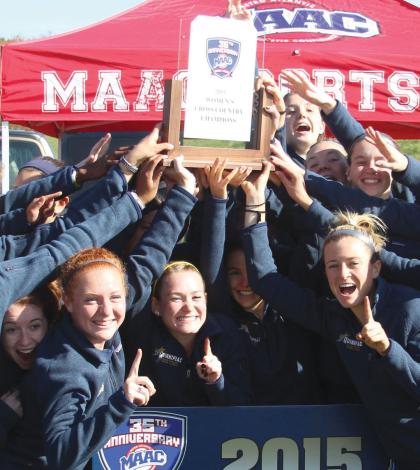 “It was really exciting,” Quinnipiac head coach Carolyn Martin said. “We had it in sight and knew that down the line this was going to be a goal.”

With the win, the Bobcats advance to the NCAA Northeast Regional at Franklin Park in Boston on Nov. 13. 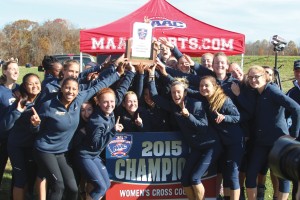 “Everyone started crying and hugging each other when we found out that we won,” senior Tracy Campbell said. “I couldn’t have been more proud of the team.”

Although the runners’ times are different, teamwork is one thing that has always stayed consistent throughout the season and leading up to the race, according to sophomore Emily Wolff.

“We were racing as a team for our teammates, not just for ourselves,” Wolff said. “The biggest thing is we ran together, we stuck together as a team, so we all kind of drove each other to run as fast as we could.”

Iona has held the MAAC Championship title since 2005. For Quinnipiac, upsetting the reigning champions was almost unimaginable.

This wasn’t the first time Quinnipiac was successful in a major race this season. Most notably, the Bobcats finished 2nd out of 39 teams at the 2015 New England Championships in Boston on Oct. 10.

Being mentally prepared, Martin said, was equally as important as the physical aspect of the championship race.

“We really focused on the mental aspect of training this year,” Martin said. “Through every portion of the race I’d have them visualize different scenarios that could happen in the middle of a race.”

For Quinnipiac, the program’s last conference championship came in 2007, when it won the NEC Championship.

“[Winning the conference] was our main focus all season,” Campbell said. “And after New England’s we really got excited for it and we kept saying we’re going to win the MAAC, we can do this, and we stayed on top of each other.”

The ability to become the most successful MAAC team of 2015 didn’t happen overnight. It was a long process that ultimately earned Martin her fourth Coach of the Year award and her first since joining the new conference.

“I think it was our top 10 that took off 45 seconds after running that course a month ago,” Wolff said. “Running together is the only way that we were going to be able to run that fast.”

Now the Bobcats face a new challenge, the NCAA Northeast Regionals in Boston on Nov. 13.

“We’re savoring the MAAC win, but we’re excited for regionals,” Martin said. “This could potentially be our best year in the regional championships as well.”

Quinnipiac has never finished better than 17th overall in the Northeast Regionals, but with the momentum coming off of their MAAC Championship, the team has a new goal in mind.

“We work by goals; our goal was to win the MAAC, but our next goal is to place top 10 in Regionals,” Campbell said. “Now that we’ve won the MAAC, we’re completely focused on getting in the top 10 and if we all run the same way we ran at MAACs, I think we can do it.”