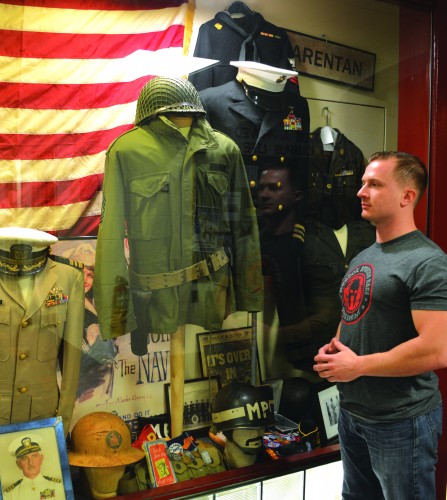 In honor of Veterans Day on Wednesday, Public Safety Officer Kevin Devaney decorated the Mount Carmel bookstore display windows with hundreds of pieces of military history. With more than 20 uniforms, 19 helmets and a plethora of medals, posters and pictures, this week’s display pays tribute to military personnel.

“My brother and I respected our dad growing up and hearing his stories,” Devaney said, “I collect uniforms, helmets, swords, knives, grenades and that kind of stuff. With the window, we are going to keep it to helmets, gear, uniforms…”

The names of the veterans are in the pockets of the uniforms as well as a DD214 number, which is the discharge number. Devaney uses this information to find where in the world that specific veteran served.

Devaney also stressed that everything in his collection is completely genuine.

Devaney said he has wanted to decorate the windows for some time, but credits Margaret Samul, manager of the campus bookstore, for actually getting it done.

“I absolutely could not have done this without her,” he said.

With that, Veterans Day is extremely important to this Public Safety officer.

“I just missed Vietnam,” Devaney said. “I graduated high school in ‘75, and in ‘74 I had to sign up for the draft. Luckily in ‘75 it was all over, so Veterans Day is all about Dad and his service to his country, like other veterans.”

Junior Christopher Bolduc, who has been in the Marines for six years, says that Veterans day is about honoring veterans’ legacies.

Veterans Day isn’t so much of a celebration as a remembrance of all the brothers and sisters we lost in the past,” Bolduc said. “Personally, I have friends from boot camp that were KIA in Afghanistan with us, WWII Veterans and Vietnam veterans that are dying off, and this is more of a remembrance of their legacy.”

In regards to the Devaney’s display, Bolduc thought it was a great addition to the Student Center.

“I think [the display] is awesome,” he said. “There are traditions that go all the way back and each branch is really displayed throughout…”

Devaney’s father, retired Sergeant Robert Devaney, flew B-25s in the Army’s fifth Air Corps. Robert enlisted in the Army on Sept. 15, 1943 when he was just a junior at Lyman Hall High School in Wallingford.

During Robert’s time in the Air Corps, he mainly flew B-25 Mitchell Aircrafts over Japan, and claims that the loud engine noises contributed to his present difficulty hearing. In addition to Japan, he was stationed in Massachusetts, Texas, Utah, Washington and San Francisco between the years of 1945 and 1947 when he was in the Air Corps. Throughout his time is the military, Robert formed a close bond with his Army brothers.

“Always keep together, that’s very important, and that’s how you gain,” he said.

After being discharged from the Army in January of 1947, Robert attended the Junior College of Commerce in New Haven and received his associate’s degree in science in 1948 when Samuel Tator was president of the college. This small New Haven commuter school went through various changes throughout the past 57 years, and is now Quinnipiac University.

Ryan Devaney, Kevin’s son and Robert’s grandson, said that the strong male role models in his family taught him how to live his life through their experiences

“Growing up with my grandfather and my uncle and my father showing me how it is,” Ryan said. “It really taught me what it means to be an American, and to really appreciate the people that have fought and risked their lives… Without that, we wouldn’t have the country that we have today.