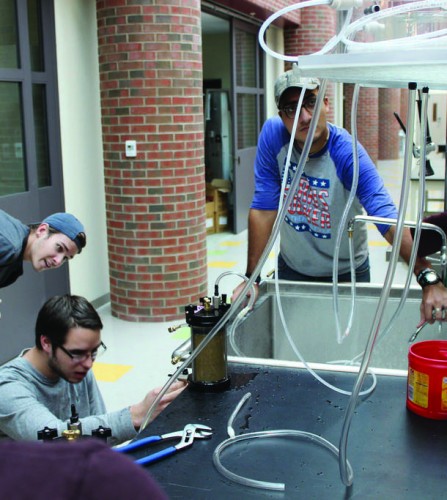 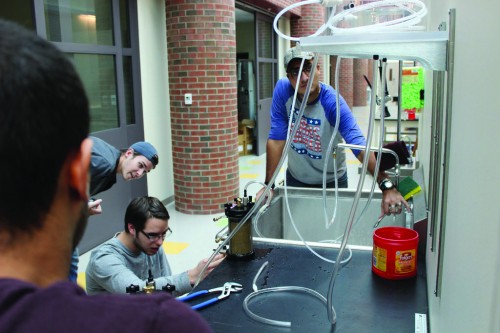 The university introduced new laboratories for engineering students at the beginning of the fall 2015 semester. These labs are a part of the administration’s big plan to strengthen the relatively new engineering program.

The university has been working to expand the space for engineering since the program began in the fall 2012 semester, the same year Associate Dean of Engineering Justin Kile began working at Quinnipiac.

One of the first developments the university made about three years ago for the engineering department was creating space in Tator Hall, Vice President of Facilities and Capital Planning Salvatore Filardi said.

“There’s a couple classrooms of engineering along the wall so they kind of had a home,” Filardi said. “We also put a suite in there for the faculty.”

This alone wasn’t enough space for the students to work. The university has been working to expand the space for engineering since the program began in 2012. There was a plethora of work accomplished with the new addition of laboratories, classrooms and production spaces this year.

Kile said the development of the new laboratories were needed not only to accompany the new engineering students, but to allow the seniors to experience working with proper engineering material before they graduate.

“This academic year is our first year with seniors,” Kile said. “So we built the labs just in time to teach them their senior-level courses. And we did a similar thing in 2014; we built a few labs so when those students were juniors they had their junior-level labs. So each summer we build the next step of what we need.”

The laboratories built this year are located on the first floor of the Center of Communications & Engineering where the Law Library used to be located.

Senior engineering major Jennifer Fremd said she has used the labs and looks forward to the new additions to come.

“We’ve used a few of the labs thus far: the circuits lab, the machine shop and the heat transfer lab,” Fremd said. “The machine shop has everything I could expect in it, and with this new year we got some new equipment like a computer operated CNC [computer numerical control] machine which is very exciting.”

But Fremd also noted some downsides she has noticed in relation to the labs.

“The circuits lab provides a great way for us to apply our knowledge, though I do wish there was more circuit design work done in there,” Fremd said. “The same can be said about the fluids lab, as it gives us an area to collect data and see how it correlates to the theories we study in the classroom.”

Overall, Fremd said she isn’t very satisfied with the usage of the labs.

“While all the labs are exciting, from my view I’m a bit disappointed in the sense that their use is very limited,” she said. “I wish there were more research opportunities to use these new spaces, though I suppose the lack of such opportunities is expected with such a young program as ours.”

Though the labs are being used by students this semester, there are still some things needed to be done before the whole floor is truly established.

Filardi explained that they are waiting for fire resistance rated windows and doors to keep the floor safe when in use.

“There’s a solid wall that has a window in it and because it’s between floors, it has to be fire-rated. So we’re waiting for the specific materials that are fire-rated windows and fire-rated doors” he said. “So as soon as those come in, we expected them soon. We’ll just change them out and it’ll be done”

Administration is confident that these new additions will carry the program to greater heights and will be a popular staple within the university.

“The labs we have are probably some of the best in the state in terms of quality of the equipment,” Kile said. “We use the laboratories to provide the real world, hands-on aspect of engineering. So the tools and the equipment that our students will go use once they graduate, they get practice and experience with that while they’re here.”