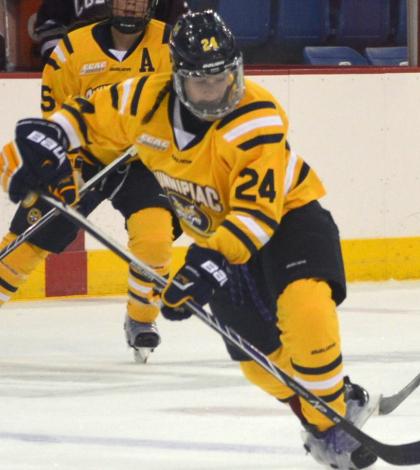 Following their 4-3 upset loss against the Yale Bulldogs, the No. 7 Quinnipiac Bobcats (5-1-1) looked to get back on track in conference play Friday night against the Colgate Raiders (4-1-3) at High Point Solutions Arena.

Unfortunately for the Bobcats, that would not be in the cards, as they would go on to tie Colgate 0-0 in overtime. 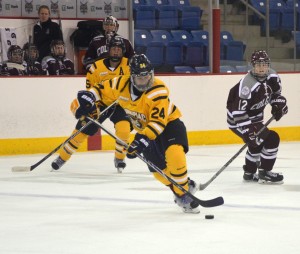 Despite the Bobcats best efforts to take control of the game, their offensive chances were stifled, as Colgate goaltender Ashlynne Rando made numerous huge saves to keep the Bobcats off the board. Following the game, Quinnipiac head coach Cassandra Turner discussed the difference Rando played in the game.

“We really worked to get a number of opportunities today,” Turner said. “I think their goalie played well, but we had chances to score that we should have capitalized on today.”

Turner also felt that the team’s lack of second chances off of shots would be a major factor that would go on to hurt them.

With the Bobcats defense playing to the standards it has set for themselves over the previous seasons. Even though they largely outshot the Raiders, Rando’s 44 saves during regulation would keep the game tied at zero, and send the game to overtime.

Prior to the conclusion of regulation, the Bobcats would suffer a scare, as leading scorer T.T Cianfarano would need to be assisted off the ice following an undisclosed upper body injury. While Cianfarano would miss her next shift, she would return to the game shortly after.

In overtime, the momentum would swing fully into Colgate’s favor, as the Raiders outshot the Bobcats 4-0 in the extra period. Yet, thanks to the great work of goaltender Sydney Rossman, who would finish with 22 saves of her own, the game would conclude as a 0-0 tie.

Turner felt it was the play of Rossman that was key for the Bobcats to stay in the contest.

“I thought [Rossman] made some key saves, exactly what we needed to keep this as a scoreless tie,” Turner said. “We knew this is what she is capable of and she really showed it tonight.”

The Bobcats will look to prepare for Saturday’s contest, as they continue their ECAC home play against a Cornell Big Red (2-3-1) team that is fresh off an upset of No.10 Princeton at the High Point Solutions Arena.