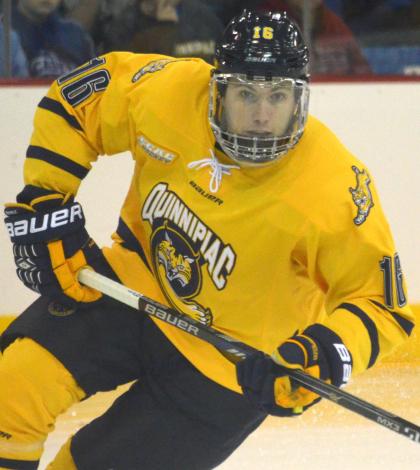 Quinnipiac men’s ice hockey moved up to No. 5 in the country in this week’s USCHO.com Division I Coaches’ Poll despite having the week off. Senior captain Soren Jonzzon said that the bye week gave the team some needed healing time.

“We can lick some wounds,” Jonzzon said, “and try to deal with some bumps and bruises that guys have and use a little bit of extra time to feel better.” 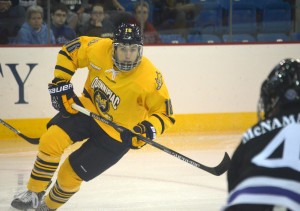 Although the past week provided the Bobcats time to recover from the beginning of the season, it halted the team’s hot start. In Quinnipiac’s latest action, the Bobcats improved to 6-0-0 with a weekend sweep over St. Cloud State.

Quinnipiac not only swept St. Cloud State, but went on to sweep the ECAC Hockey Weekly Awards as Travis St. Denis earned Player of the Week, Michael Garteig earned Goalie of the Week, and Chase Priskie earned Rookie of the Week.

The players do not feel that the week off will break their momentum, though.

“Obviously, when you’re rolling it’s nice to keep on going,” Jonzzon said. “But I think as long as we ramp up the intensity in practice, we come in with a mindset that it’s the first weekend of our conference regular season and we need to be ready to go. I don’t think it should be too much of an issue.”

“I think we will come out really fresh,” sophomore Landon Smith said.

The team opens its ECAC title defense with a road game at the Colgate Raiders on Friday. The Bobcats are looking to continue their recent dominance at Colgate’s Starr Rink. The Bobcats have outscored the Raiders 14-6 in their last three meetings at Starr, including a 4-2 victory last season where Smith, St. Denis, Andrew Taverner, and Tanner MacMaster scored.

“Colgate has some high-end guys,” Jonzzon said “And if you’re not paying attention, they’ll take advantage of it. They’ll really get to you.”

The Bobcats end their weekend with a trip to Ithaca to play Cornell on Saturday. Although the Big Red leads the all-time series 12-15-2, Garteig has recorded consecutive shutouts at Lynah Rink and the Bobcats have won three straight road matchups.

Cornell is 2-0-0 in the early going with a home-and-home sweep over Niagara last weekend. Junior Jeff Kubiak leads the Big Red with two goals while junior Mitch Gillam posted a .955 save percentage in the team’s opening weekend.

However, when it comes to Cornell, Jonzzon says to throw records out of the picture.

“Cornell is always a big, physical team,” Jonzzon said. “They play in your face. We play in their face. Obviously there is some history there. It gets a little chippy, but they’re fun games to play because the emotions are always high. They’re always battles from start to finish.”

As the Bobcats begin the road to win their third Cleary Cup in four years, Smith says he expect the team to continue their undefeated start.

“Absolutely,” Smith said. “Expect nothing less. As long as we do what we need to do and work hard, I think good things will happen.”