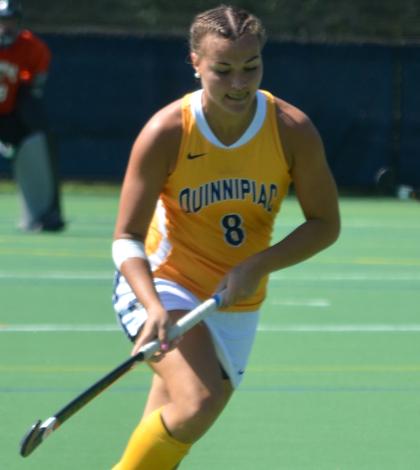 Quinnipiac field hockey (8-10, 5-1) clinched a share of the Metro Atlantic Athletic Conference regular season title this fall, and is set to head to the conference tournament at Monmouth University in New Jersey on November 6th through 8th. The Bobcats go into the tournament as the No. 2 seed, and are two wins away from reaching the NCAA tournament. Their first game in the tournament is in the semifinals on Friday against the Rider Broncos (12-6, 4-2).

Even though the Bobcats finished with a share of the conference title, this has not been an easy season. Quinnipiac was only 3-8 in its first 11 games before conference play started. In those 11 games, some of the teams the Bobcats faced were Boston College, UCONN, Michigan State, and Penn State. 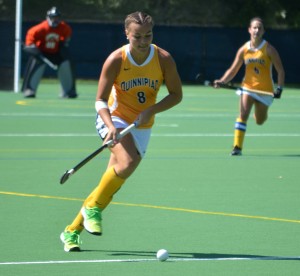 Quinnipiac head coach Becca Main, who is in her 21st season with the team, likes to make tough out-of-conference schedules to strengthen her team for MAAC action.

“We played the sixth most difficult schedule in the month of September with the intention of getting us primed, getting us faster, getting us quicker,” Main said. “But I have to be honest, at the end of September it may have been a bit too much.”

Senior midfielder Meghan McCullough, who leads the Bobcats in points thinks everyone on the team is responsible for the offensive turnaround.

“Everyone plays a part,” McCullough said. “What I like about this team this year is that you don’t have that one person to rely on to step up and be the hero. We rely on everyone and everyone steps up and gets the job done.”

“We rely on everyone to learn their role on the team and figure out how they’re going to benefit the team,” Swartz said.

Heading into the conference tournament, Main is really confident at what her team can accomplish.

“We’re the team to beat,” Main said. “We’re the team that everyone knows you’re going to get a full 70 minutes, sometimes 80 and sometimes 90 minutes because we’ve already proven that. So I think there’s a little bit of that scare factor with us.”

If the Bobcats can get by Rider, who they came back to beat 3-2 in overtime last month, it is likely that they will face the Monmouth Hawks (8-10, 5-1) who gave them their only conference loss of the year.

Main likes the idea of a rematch against any of the three other teams in the tournament.

“Any rematch you look forward to,” Main said. “It’s this change in emotion, it’s a do or die, it’s an all on the line. You have to leave it all out on the field and trust what your team is doing.”

Opening faceoff for the Bobcats contest against Rider is scheduled for Friday at 2 p.m. on the Monmouth University campus in West Long Branch, N.J.

If the Bobcats win they will face the winner of the Monmouth-Fairfield game on Sunday 11 AM in the same location.