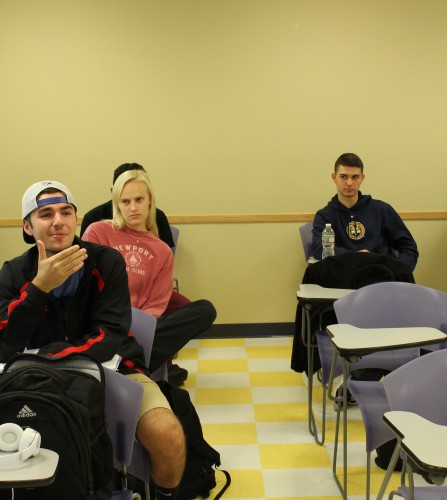 Freshmen are now expected to begin a “personal quest” through First-year Seminar, commonly known as FYS.

According to Quinnipiac’s University Curriculum, the purpose of adding FYS to the general education curriculum is to prepare students for the different aspects of life after Quinnipiac and to introduce them to an inquiry-based thought process.

LoCasto added that ultimately, toward the end of the course, students will develop a guiding question. This question is designed to be complex, but it is not something students will necessarily have to answer. Instead, students will use that question to investigate their general education.

The real question is this: are students liking the FYS course?

There appears to be mixed feelings, and LoCasto believes one would get that with any college course.

Many freshmen expressed dissatisfaction with the course but declined to comment because they were worried their professors would read their negative reviews.

However, there are some who are trying to understand the true purpose of the course.

“It’s awkward sometimes,” freshman Hannah Burford said. “Because in our class we just sit there.”

According to Burford, the students are encouraged to ask questions, but are then answered by their professors with more questions, rather than receiving solid feedback.

“I get it. I like the whole inquiry idea, but it seems like they’re trying a little bit too hard,“ Burford said.

“The way it is executed is a little different,” Patel said. “But I do enjoy the idea of it.”

Patel said that since it is a seminar class, students are encouraged to speak a lot, and that has been slightly challenging for her. However, Patel finds some of the discussion topics to be very interesting because they are things that she normally would not think about.

“I want to be a scientist, so I only think from a scientist’s point of view,” Patel said. “It’s interesting to jump out of that.”

According to Patel, FYS has done a good job in reminding her that there is more than one perspective when looking at things.

Felicia Duch, a sophomore who currently serves a peer catalyst, believes that FYS has a more effective approach than QU 101.

“I know there are some complaints about it,” Duch said. “But, it is a really different class. When you have a whole class and say you guys can run it, students, as far as I know, have never had that accessibility before. They don’t know what to expect.”

As a peer catalyst, Duch is a mentor for the freshmen who are taking the class. Duch understands what the professor, Richard Kamins, expects of the class, as she has previously taken QU 101 with him.

Duch likes FYS because it emphasizes looking at things with a fresh perspective and the importance of being able to analyze topics in different ways. She believes that having such intellectual curiosity is very important for our modern society.

Kipp Hopper, a freshman, shares that perspective and is enjoying the class.

“Most of the class is trying to take the edge off of the grading system,” Hopper said. “It’s still there, but that’s not what the course is about. The course is about trying to explore your options while still doing it professionally.“

Hopper understands that many of his peers do not share his opinion.

“It’s definitely a class where you get what you make of it,” Hopper said. “If you don’t pay attention or put in the effort, you probably won’t reap the benefits.”