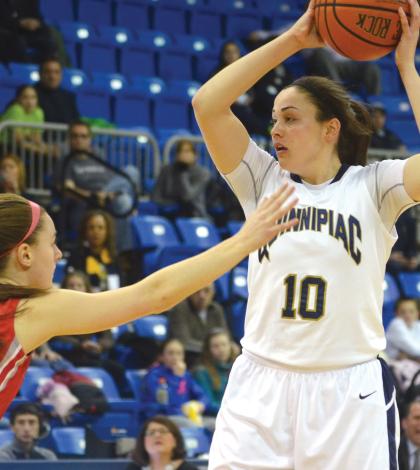 The “old rush” might be gone, but the “gold rush” attack will remain for Quinnipiac women’s basketball.

Though Quinnipiac graduated five seniors at the end of last season, Quinnipiac head coach Tricia Fabbri says her team’s ability to win with its depth will remain ever-present. 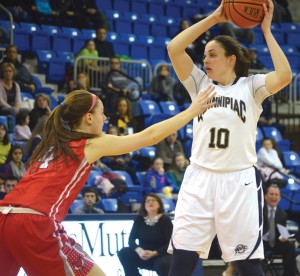 “We’re not going to stray from our success, which is in numbers,” said Fabbri, who’s entering her 21st season with the Bobcats. “In players one through fifteen, I don’t anticipate us going away from using an entire roster. It’s a proven style of how we win ball games.”

No longer will the “gold rush” begin by the tip of Valerie Driscoll into the ball handling of Gillian Abshire. No longer will Abshire dart sharp passes to Nikolinwwe Ostergaard, Samantha Guastella or Jasmine Martin. That group, which led the 2014-15 Bobcats to a 31-4 record, helped Quinnipiac win a conference title in two of the last three years.

“We really enjoyed last year, but it’s really easy to move forward into the focus of this year,” Fabbri said. “It’s just natural year after year.”

And though the game is not changing, Fabbri has placed some of her players into different roles.

Sixth-man of the year Napolitano is expected to lead the way. Napolitano, along with Carroll, Martucci and Fabbri, have been named captains.

“Maria is the leader of this team,” Fabbri said. “Her experience out on the floor with Adily Martucci is a cornerstone that this coaching staff is leaning on. Her defensive prowess is a reason I think she will be the defensive player of the year. I expect her to step up and lead this team on the floor.”

Martucci, who is also expected to help guide the new-look team, is taking on a more vocal role with the Bobcats.

“I just felt like it’s different for me because I had to mature,” Martucci said. “Taking more responsibility for myself and for my teammates. I also wasn’t as vocal. Now, that I am a captain, I have to be more vocal.”

Five new players have arrived this year for Quinnipiac, as well.

“The intensity and speed up and down the floor is the biggest change for me,” Thornton said. “At home, our offense was by running a lane and taking a lot of fast breaks. Here we have a set play and offense. You have a place to be.”

Former team manager and senior walk-on Shahara Ingram will also join the team. Brittany Martin, the younger sister of Jasmine, is a part of the incoming class, as well.

“I fell in love with the school on [Jasmine’s] first visit,” Brittany Martin said. “Jasmine was the all time scoring leader at my high school, so I’m used to this. We have the same name, but I wanted to make my own name. She’s Jasmine. I’m Brittany. I can’t compare myself to my sister.”

Brittany’s approach to be her own player has impressed Fabbri.

“She’s a heck of player just like her sister,” she said. “She’s explosive with the ball, lightning quick with the ball, smart IQ player. I expect her to have a tremendous career. We like talking four more years of a Martin.”

With the preseason winding down, Fabbri has seen growth with this team, but thinks their inexperience will continue to correct itself throughout the season.

“We’re talented, untested and unsure in where our answers are going to come from,” Fabbri said. “But, I see better unity between players one through fifteen. I see a togetherness already established and that’s going to parlay into bigger and better things.”

While admittedly inexperienced, the veteran and rookie Bobcats are scratching at the chance to build on if not, achieve more than last year’s team.

“My expectations are the same,” Martucci said. “We still want to win. Those goals don’t change just because we have a new team. [Fabbri’s] motto was goals don’t change. We’re here to do the same thing, if not, go farther.”

“I expect nothing less than what they had last year,” Martin said. “I expect us to be held if not to the same caliber, greater than that.”

The Bobcats will try to live up to their own expectations when they begin their season at Army on November 15.