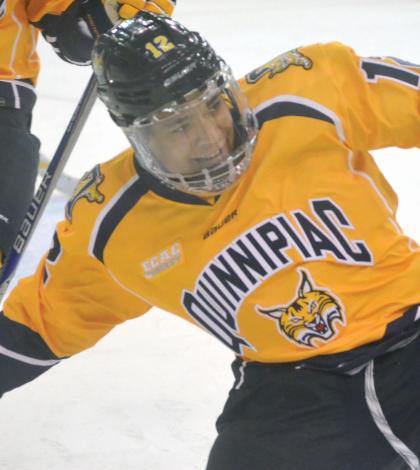 Contrary to the common saying, not all things are bigger in Texas. Especially hockey. 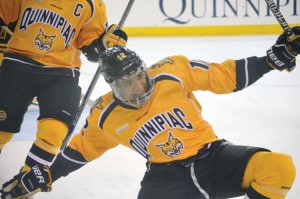 And after recording three goals and three assists in his first six collegiate games, the one-time Providence College commit is thriving in Hamden.

Aldworth was born in Brownsville, Tennessee before he moved to Keller, Texas in grade school. Aldworth and his family just so happened to move near the National Hockey League’s Dallas Stars’ practice facility. He said it was a visit to the facility with his dad that steered him into playing hockey.

“So one day, I just went in with my dad,” Aldworth said. “We were just looking around the neighborhood or whatever, went in the rink, and they were practicing. They let us watch practice and I thought it was really cool. So I told my dad I wanted to try ice skating and I just started playing hockey after that.”

By the time Aldworth moved to the Texas, the sport had a booming culture. He said that the Stars’ Stanley Cup victory in 1999 helped grow hockey in his area.

“[The hockey culture in Texas] was better than it is now because the Stars won the [Stanley] Cup in ’99,” Aldworth said. “Youth hockey started to boom in the area and when I started playing it was like 2003, so it really wasn’t that long after the Stars won the Cup.”

Although the sport was growing, Aldworth said he had to move his game elsewhere in order to grow as a player.

“There were a lot of youth hockey leagues around when I was younger,” Aldworth said. “But the problem was that it wasn’t a very good hockey culture. There were a decent amount of kids that played but there weren’t any good kids, so you had to get out of that so you could develop your skills and game.”

Instead of going to a nearby public high school, Aldworth decided to go to Cushing Academy, a prep school in Ashburnham, MA. He said he was introduced to the school through tournaments he played in Boston and Chicago with his travel team in Texas. Although his mom was sad to let her son move across the country, it was Aldworth’s dad that realized the move was about more than hockey.

“[My dad] was also realizing that it was improving me as a person because of the education and things like that that I wasn’t going to get at a public school in Texas,” Aldworth said. “So [my parents] were sad, but they understood.”

The change from Texas to Massachusetts was just one of many moves that Aldworth made in his hockey career. He chose to play in the United States Hockey League (USHL) after prep school instead of immediately entering collegiate hockey.

He first played for the Tri-City Storm, but the team then traded Aldworth to the Lone Star Brahmas, a North American Hockey League (a tier below USHL) team located a town over from Keller.

After finishing the season in with the Brahmas, Aldworth knew he wanted to switch back to an upper echelon league.

“I played my 10 games [with the Brahmas,]” Aldworth said. “And then realized that I needed to get out of this league, like ‘I shouldn’t be here right now.’”

Aldworth began looking for a team to play with in the British Colombian Hockey League (BCHL) before landing with the Vernon Vipers. Aldworth led the team and was fourth in the BCHL with 37 goals and finished third on the team with 56 points in his 57 games for the Vipers in the 2014-2015 season.

Aldworth knew he was going to move on to college hockey after his season in Vernon. Having committed to Providence College and coach Nate Leaman three years prior, it seemed that Aldworth would play with the reigning NCAA champions.

However, Aldworth declined his commitment from Providence because he said he didn’t appreciate the way he thought the Providence coaches would use him.

Luke Shiplo, Aldworth’s teammate with Vernon, had committed to play at Quinnipiac following his season in the BCHL. Aldworth said that Shiplo’s input on the school led him to follow the same path and play for the Bobcats.

“I was asking him how his visit was,” Aldworth said. “And he said he loved it, so he was a big influence why I decided to come here, as well as the facilities and coaching staff.”

“Rand [Pecknold] is taking players like Landon Smith and Sam Anas and turning them into players that can play both ends of the game,” Aldworth said. “I feel like he could do that with me as well, help me play both sides of the game better.”

Even after playing two seasons in junior hockey, Aldworth said he had a tough time acclimating to college hockey. Not only were the workouts harder at Quinnipiac, but Aldworth had been out of school for two years and says he has since been working to balance his schoolwork with hockey.

Pecknold, on the other hand, says that the freshman is making great strides compared to other first year players.

“There are a lot of players that go onto Division I hockey and aren’t accountable and that’s why they don’t get better,” Pecknold said. “[Aldworth] has been great. He knows what he needs to work at.”

Aldworth got off to a quick start to his opening season with the Bobcats. After failing to record a point in his first game at Holy Cross, he wowed the Quinnipiac fans in home wins against Holy Cross and Arizona State.

In his home opener against Holy Cross, Aldworth scored got his first collegiate goal in the second period and tacked on two assists. He came back five days later and notched his first career multi-goal game to go with another assist.

“It’s kind of easy to get points when everybody is doing their thing,” Aldworth said.

One teammate who has meshed with Aldworth so far this season is line-mate and team captain Soren Jonzzon. Aldworth assisted Jonzzon on a goal for his first collegiate point in the 4-2 home win against Holy Cross. Jonzzon says that the tandem can only improve as the season progresses.

“I think the more we play together,” Jonzzon said, “The more we will be able to read off each other. As a freshman, you know their growth curve is going to be a lot better than say maybe myself as a senior.”

Aldworth and the Bobcats enter ECAC play this weekend with a road trip to Colgate and Cornell. Jonzzon wants Aldworth’s play to trickle down and help the rest of the Bobcats.

As for Aldworth’s expectations for the rest of his freshman campaign, he is not concerned about individual points.

“I’m going to focus on doing the little things right defensively before I focus on scoring goals or getting assists,” Aldworth said. “I want to make sure that my own end is cleaned up before I try to play another team’s end. So I don’t have any prediction point-wise or anything like that… I just want to win games.”