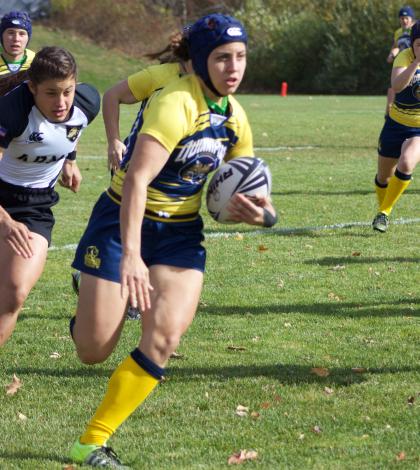 In a Halloween matinee on senior day for women’s rugby, the Bobcats prevailed over Army by a final score of 20-12.

Despite a strong effort from the Black Nights towards the end of match, Army was unable to come out on top, as they did when the teams met last on September 12th.

Just about five minutes into the match, following a run from senior Raechel Stimson, a series of passes and shifts to left by the Bobcats led to an early try for flyhalf Maggie Myles, in the left corner of the try zone to put Quinnipiac up 5-0. The conversion was unsuccessful, as was every other for the Bobcats during this match. 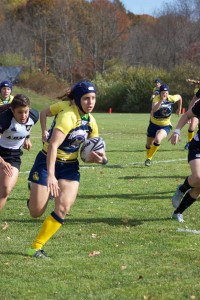 “I think its just preparing all week for the game, you know, we do early morning lifts, we get after it at practice,” Maher said. “We work hard all the time to get ready for the game so that not only the first five minutes but also the whole game we can play hard.”

Not too long after, more hard, tough running from Quinnipiac but this time coming from Maher.This led to a wide open try for freshman Emily Roskopf, extending Quinnipiac’s lead to 10.

Later on, Rebecca Haight would get a try in the very front left corner for Quinnipiac for the last score of the half, leaving the Bobcats up 15-0.

About half way into the second half, powerful running from Maher once again ended in a try in the middle of the try zone, carrying multiple Army players with her.

Stops on the goal line were in abundance for Quinnipiac during this match, but they could not hold off this feisty Army team forever. Army scored their first try of the match soon following Maher’s score, succeeding on the conversion to make the score 20-7.

Firing on all cylinders, Army scored again with about 9 minutes left in the game, but it was too little too late, as Maggie Myles ran the lock out and sealed the 20-12 victory for Quinnipiac.

“We got lucky at times,” Quinnipiac head coach Becky Carlson said. “They were aggressive and they pushed us back on our heels at times but we prevailed because we scored more points than they did.”

With the win, the Bobcats improve to 7-2 on the season. Quinnipiac is back in action on Saturday, as they travel to take on West Chester. The contest is set for 12 p.m.