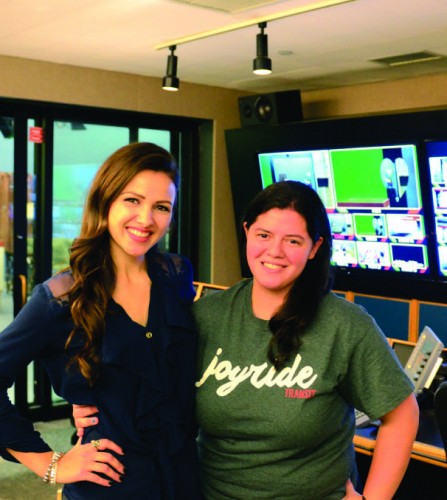 What does Grover Cleveland have in common with a hot dog? Ask the Quinnipiac Film Society.

QFS hosted its 48 Hour Film Festival over the past two weeks, an event that entailed a kick-off meeting, filmmaking and a final screening last Wednesday night. Members of the club teamed up and were given 48 hours to produce a short film incorporating a hot dog, a character named Grover Cleveland and the line, “I’ve made a huge mistake.”

The festival included three teams: one freshman team and two upperclassman teams. One of the upperclassmen teams won with a film titled “Mr. President.”

Senior Christina Warchol was the editor of “Mr. President.”

“Each group picks out of a hat and gets a genre,” Warchol said. “We got thriller.”

The film was set at a dinner hosted by President Grover Cleveland. It not only integrated the line, prop and character well, but also included a plot twist ending that stunned the audience. A loyal friend later assassinates him, but the film at first leads the audience to suspect a guest who was thrown out of the party.

Jackie Dolisi, junior and assistant director, spoke about the fast pace of the film’s production.

“Right after we got our genre, [we went] to Christina’s job in the new school of communications,” Dolisi said, since Warchol was unable to make that meeting. “[We] sat down at a table and spat ideas off of each other.”

Senior Nicole Rivard was the director of photography.

“We nominated the positions to each other and basically walked up to Christina and told her she was going to be director,” she said.

One of the first steps after genre selection was writing the script.

“Sean Kelly wrote it that night [and] did an amazing job,” Rivard said.

After the script was written, they could begin filming the next day. Dolisi said they filmed from about 10:30 a.m. until 7:30 p.m.

Warchol and Dolisi joked about how they only used Rivard for her lenses but went on to praise her filming skills.

“Nicole is an amazing director and photographer,” Warchol said. “She got on the floor for some scenes. She was so dedicated.”

Rivard explained how the film was a learning experience.

“We all learned a lot of different filming positions,” she said. “This was my first time being assistant director, which was interesting.”

The team said filmmakers must be able to work around unexpected problems. One challenge they faced, besides the time restriction, was with an actor’s availability.

“Our main actor, [who played] Grover Cleveland, got a message from his dad in the middle of the day saying that he got tickets for the Mets game that night, so he had to leave,” Rivard said. “So, we had to film super quickly because he needed to be out by 5 p.m.”

Despite those issues, the team completed the film and wowed the audience and judges. The film ends with a powerful shot of the door closing on the assassin and Cleveland’s wife.

The team members could not say enough positive things about the experience. Dolisi and Rivard both praised the director and editor for editing the piece until the moment it was due.

“We didn’t want to kill each other at the end of the day which was a plus,” Dolisi said. “It was fun and a great bonding experience.”