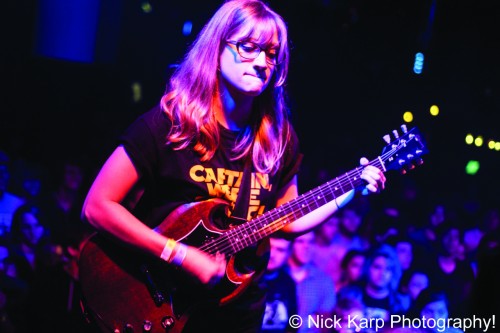 Petal’s debut full-length album “Shame” has been a long time coming for Scranton, Pennsylvania’s Kiley Lotz after the 2013 self-release of the EP “Scout.” The EP, which was made in her garage, caught the attention of Run For Cover Records, an indie label growing in popularity over the past few years. Petal was signed shortly after.

Lotz is the only permanent member of Petal; the other members rotate. She is frequently assisted by the indie punk band Tigers Jaw, composed of Brianna Collins and Ben Walsh, who also worked with her on the album. Together they compose a beautiful harmony of nostalgic 90s-infused songs.

Petal has a quality of remembrance in its music that strikes a powerful emotional feeling in the listener. It is hard to not feel affected by Lotz’s pure honesty in her vocals and lyrics that are introspective and omnipresent. The singer and guitarist confronts her struggles with anxiety, depression and paranoia throughout the album, and the shame (hence the album title) that comes with the illnesses.

“I really kind of came to terms with what I was dealing with…all the embarrassment and all the speculation, all the mind-reading of everyone hating me, didn’t exist,” Lotz said in an interview with The Le Sigh, a blog that highlights women in music and art. “Everyone is carrying around some shame about something.”

In a male dominated genre, the combination of Lotz and Collins is refreshing and empowering. The two combined writing efforts for “The Fire,” a track that details both women’s experience with an online stalker.

“I was excited to write a song that felt powerful and weird and off,” Lotz explained. “I can’t stress enough what a blessing it is to be writing music with my friend who’s also a woman.”

The song displays courage against the women’s stalker by proclaiming, “I won’t let you forget, you think of me wrongly. I will find you, you can go anywhere I can too.”

Lotz holds her ground bravely and takes massive risks from track to track. “Nature” is not only bold lyrically, with the lyric “I want to be part of the nature you were born from,” but also musically. The song is stripped down to just Lotz singing over a single drum beat. The song is a change of pace amongst guitar-supported songs, and the risk pays off. Lotz’s vulnerability shines through, making the listener feel every emotion.

Even though this is Petal’s first LP, Lotz feels at home on any stage. In addition to writing, recording and touring, the 24-year-old spends her time acting in on and off-Broadway plays. Her most recent off Broadway show “Underland” co-starred Annie Golden, who plays Norma in “Orange is the New Black.”

Lotz supported her local art scene by commissioning Philadelphia music photographer Danielle Parsons to create a dreamlike purple/pink album cover that perfectly encapsulates the ethereal feeling of the songs. The hazy photo sets the mood for the album.

Lotz also commissioned Boston-based videographer Alex Henery to create a music video for “Heaven,” the album’s second released single. The video starts off with a nervous Lotz, uneasy about going out and presenting meticulous behavior, giving the viewer a look into life with anxiety. Over the course of the video she works up the courage to be around people and talk to different strangers in New York. By the end of the video she has come out of her shell and dances with the friendly Coney Island visitors, showing the very personal transformation she went through, mirroring the album’s main theme.

The video and song were inspired by Lotz’s move to New York, when she was forced to face her mental illness.

“That was a really difficult transition,” she said. “I really started to experience some symptoms with mental health issues that I had had my whole life, but I just thought they were totally normal. I thought everyone was like that.”

The first single released, “Sooner,” is everything Petal fans were anticipating and more. With smooth vocals and unique subtlety, Petal sets a mood of calmness balanced by intense guitars, all while igniting excitement and powerful emotion within the listener. From the album’s vibrant opener “Camera Lens,” to the low-key, evocative finale “Silly Heart,” each song is well done on its own, but the way the songs are strung together tells a bare-bones story of sorrow and fearlessness, with constant tempo changes and band accompaniments to keep the listener hanging on every second.

The 12-song album debuted on Run For Cover Records Oct. 23. Petal will be on tour with Tigers Jaw for the remainder of the month. The album is available for listening on Spotify, SoundCloud, YouTube and available for purchase on iTunes and runforcoverrecords.com.