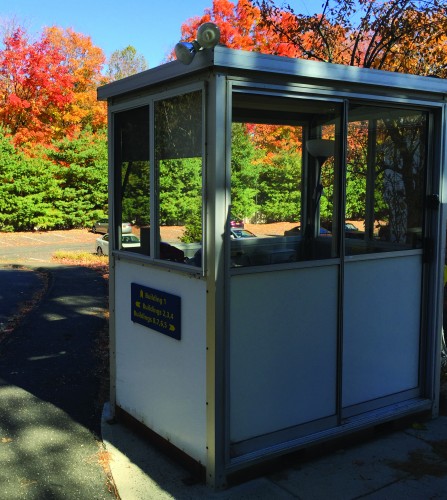 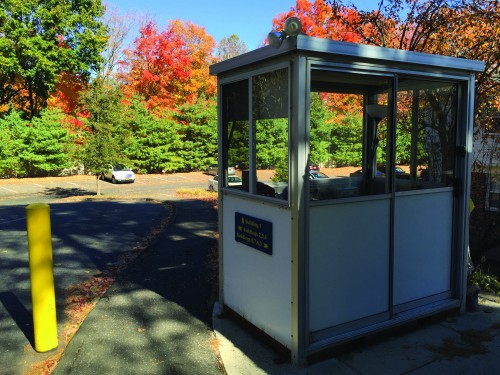 Residents of Whitney Village may be accustomed to not seeing a Public Safety officer in the guard booth. But that’s not to say that Public Safety isn’t around.

Chief of Public Safety Edgar Rodriguez said the patrol area was enlarged a year and a half ago to include locales near Whitney Village, like the WQUN radio station and student housing on Woodruff Street. This change was due to the school’s growing amount of property in the area.

Along with this, Rodriguez said Quinnipiac hires Hamden police officers to patrol these areas from 5 p.m. to midnight, Monday through Saturday, doubling their coverage.

Despite this, some students would still prefer having a guard in the booth.

Graduate student and Whitney Village resident Emily Bean said that due to the lack of a constant guard, she makes sure she is with her boyfriend, who lives nearby, while in the parking lot of Whitney Village at night.

“Once I’m in [the building], I feel fine; it’s just, like, walking through the pathway to get into here, ‘cause I feel like anyone could drive down,” Bean said.

Other Whitney Village residents, like senior Katie White, are indifferent toward Public Safety officers being stationed at the booth.

“We’re all seniors. We should all know how to take care of ourselves and it’s not like we’re 10 miles away from Quinnipiac. If we had a problem, [Public Safety] would be there soon,” she said.

Rodriguez feels that having expanded the patrols to the areas around Whitney Village in a “big circle” has improved response time throughout the area. He also feels that having the officers be mobile improves the “visibility” of Public Safety.

“We want everybody to know they’re safe here. This is a safe campus, and we’re going to do whatever we can to keep it that way,” Rodriguez said.

Despite this, Whitney Village resident and senior Devin Pallitto said he thinks that the lack of guards at the booth is unusual since there are officers at checkpoints around York Hill, Mount Carmel and Hogan Lot.

Pallitto even had his own theory as to why there isn’t a stationed officer.

“I personally think that Quinnipiac [has] been going through budget cuts, because… the buses have been… consolidated, staff [is being] let go. Whitney Village is generally very quiet, so they don’t really feel like they need to have somebody here because we take care of ourselves,” he said.

But this is not the case, according to Rodriguez, as the budget for Public Safety has not been cut in past years. Rodriguez said he has actually been able to hire more personnel.

Pallitto doesn’t believe that having a constant guard presence at the booth is necessary, but feels that it is a nice thing to have. He said he remembered the Public Safety officer at the booth checked in with him during a time when his phone didn’t work, back when he first lived in Whitney Village two years ago.

Whitney Village resident and graduate student Samuel Jacobson said he feels safe despite not having a guard at the booth. However, though he doesn’t personally complain, he thinks that the university doesn’t really pay attention to Whitney Village.

“It’s just kind of a lack of caring overall … in contrast to everything else… it seems like we’re kinda forgotten about,” he said.

“A lot of attention is put on York Hill, like it should be, as the majority of the [upperclassman] population lives there, but I do feel that something is lacking here, but it doesn’t really take away from my enjoyment of living here,” she said.

Jacobson noticed an inaccuracy in “The Senior Resource and Policy Guide,” which he said he was given at the beginning of the year when he moved in.

The guide is an informational packet, which was produced by Residential Life and Student Affairs for this academic year. He noticed the wording of the booklet, which he felt implied there would be an officer stationed at the booth.

“If you are locked out during the day (between 12AM-7PM) you can use the public safety officer located by building 1 to be let back into your building/room,” one section of the packet states.

Associate Vice President of Student Affairs Cindy Long Porter said in an email that the information in the packet was the prior staffing at Whitney Village. Porter’s staff will confirm the change with Rodriguez and send corrected information.

Rodriguez said he wishes to remind students that if they need help, Public Safety officers will come as soon as they can.

“I want everyone to understand that we’re not just here when somebody gets in trouble. We’re also here to help the community and to assist them in any way possible,” he said.