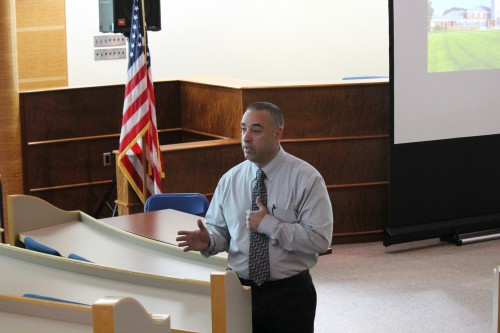 The frequency in school shootings has prompted the Department of Public Safety to offer training for students, faculty and staff for active shooter awareness, according to the Chief of Public Safety Edgar Rodriguez.

There have been 52 school shootings this year alone, according to Every Town For Gun Safety’s research. Rodriguez said it is important for the university to be prepared in case there is an active shooter on campus.

“An active shooter could occur anywhere. It could occur here, in a nightclub, a fast food restaurant, so forth and so on,” he said. “This is something that is happening more frequent[ly] than ever and we just need to be prepared.”

Rodriguez said Public Safety has a protocol in place should there be any type of dangerous situation – such as an active shooter on campus.

“Honestly every time I turn on the news or read a news site and they mention there is or was another [school shooting] and my initial reaction is ‘pff of course’ or ‘what a shock’ and I’m almost desensitized to it,” he said. “But then I walk around campus for the next week and every bump and sound you I hear makes me jump. It’s there in the back of my mind, and it’s horrifying.  ‘What if we’re next?’”

Vice President and Provost Mark Thompson sent an email to the university community on Oct. 26 with the dates, times and places of the active shooter awareness training sessions. 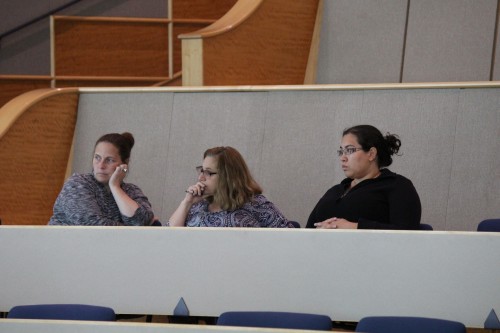 “Acts of violence on college campuses have increased in frequency, and have occurred most recently in Oregon and Texas,” he said in the email. “These events naturally cause varying levels of concern about safety and preparedness at our own university. While these events are generally unpredictable, it is important that we do everything possible to prevent them and be as prepared as possible to respond effectively should such an event occur.”

Lisella said the fact Quinnipiac has to hold these training sessions because of the increase in school shootings is crazy.

“Some of us aren’t even legal adults before we come to college,” he said. “It’s absurd that we’re at a point as a country and society that the administration at an academic institution has to take steps to teach their students and faculty members how to not get killed.”

DISCLAIMER: The video displays a simulated active shooter event and contains graphic scenes that may be disturbing to some viewers.

In the email, Thompson wrote that the university has been taking precautions to prepare for dangerous situations. The university’s 11-member Emergency Management Team meets monthly to discuss how to deal with issues like these, according to the email.

Public Safety also began arming several officers in January 2014 to ensure the safety of the campus. In addition, the officers are engaged in ongoing training, exercises and drills with the university, the Hamden Police Department, the North Haven Police Department and the Connecticut state police, according to the email.

Facilities also works to secure all classrooms, offices and buildings on campus, according to the email.

If there was an active shooter on campus, Public Safety would send out a QU Alert to students, faculty and staff with the location of the incident, the description of the suspect and information on whether to stay put or evacuate the premises.

“Our goal is to provide the students, faculty and staff an update every 30 minutes with a status of the incident to let people know what is going on,” he said.

Professors have not been trained yet, but Rodriguez said he hopes faculty will attend the new active shooter awareness training. The training sessions are not mandatory for faculty and staff.

Professor of management Angela Mattie said it is good that Quinnipiac is having the training and hopes the university never has to mobilize the active shooter protocol.

“I think it is unfortunate that we are living in an era where we need such a policy,” she said. “However, I commend Quinnipiac administration and Public Safety for stepping up and producing what is a well thought out policy with public welfare and the protection of faculty, students and staff on our campus.”

“Times have changed and I think we need to be vigilant and proactive,” he said. “I think everyone needs to know, God forbid something like that happen here, what you need to do.”

Lisella said he is going to attend one of the training sessions so he knows how to protect himself if there were an active shooter on campus and because he is curious as to what information will be given.

“I’m obviously not expecting a military combat training session on how to disarm and neutralize hostile enemies, but I also expect a school of our reputation to provide us with more than a PowerPoint of statistics followed by a quick [Public Service Announcement] and send us on our way,” he said.

Rodriguez also stressed the importance of the Rave Guardian app in order to report suspicious activity on campus easily to Public Safety.

“It’s so nice to have [Rave Guardian] because you have [Public Safety] at the push of a button so we are alerted,” he said.

Thompson wrote in the email that any questions about active shooter awareness training should be directed to Rodriguez or Associate Vice President for Facilities Operations Keith Woodward.
“Your cooperation in working to make our campuses as safe as possible is important and appreciated,” Thompson said in the email.