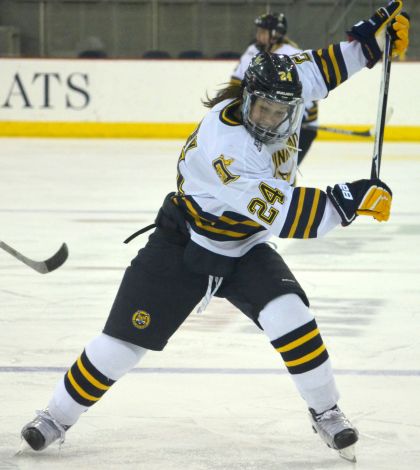 Following a 1-1 draw against Western in its last outing, No. 8 Quinnipiac women’s hockey team played host to Yale at the High Point Solutions Arena. Despite the rivalry between the two ECAC programs, the meeting on Saturday was not a conference game. 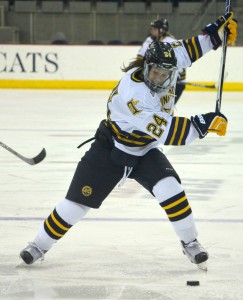 Prior to the contest, the team honored senior forward Nicole Kosta for scoring her 100th point. Kosta, who scored her 100th point in the team’s 5-1 victory over Maine, joins Kelly Babstock and Shiann Darkangelo as the only players in program history to reach that milestone.

On a night in which her scoring was honored, Kosta would continue to add to her total. She recorded two goals and an assist en route to Quinnipiac’s 6-3 victory on Saturday night.

“It is nice for our players to be able to have the confidence that they can score.” Quinnipiac women’s ice hockey head coach Turner said, “For them to be able to do that, especially against Yale, was great.”

Kosta opened scoring in the game to give the Bobcats a 1-0 lead in the first period. The Bulldogs would not lay down, though, as they would level the score at 1-1. The Bobcats would take the lead back before the conclusion of the period, as Kosta would score her second of the night while on the power play, and giving the team a 2-1 lead going into the intermission.

The Bobcats would come into the second period playing with as much intensity as they ended the period with. With their forecheck frustrating the Yale defenders, and keeping the puck in the offensive zone, the Bobcats would eventually capitalize as T.T Cianfarano would put her fifth goal of the season in the top corner, and put the Bobcats up 3-1 early in the period. Yale would soon have their first power play of the night, and swing momentum back in their favor.

Despite threatening the whole two minutes, several big saves from Quinnipiac goalie Sydney Rossman would keep the Bulldogs off the board. Unfortunately, Yale’s pressing would eventually cause an error, as the Bulldogs scored at even strength to cut the lead down to 3-2. As they have all season, the line of Emma Woods, Cianfarano, and Melissa Samoskevich would spark the Bobcats offense before the period ended, as Samoskevich would score her second of the season, and give the Bobcats a 4-2 lead going into the final period of play.

The Bobcats would enter the last period of play looking to protect their lead. Despite not pushing as aggressively towards the opposing net, the Bobcats would still increase their lead early, as Nicole Connery would put an unassisted rocket of a slap shot over the goalie’s stick shoulder for her second of the season, and the 5-2 lead. Kosta would show up one more time before the game’s conclusion as well, as Raquel Pennoyer would finish a Kosta feed, and give the Bobcats a commanding 6-2 lead.

Yale would score one more goal with three minutes left in regulation to cut the score down to 6-3, which would go on to be the final score. The six goals scored would be the most scored against Yale in program history.

Despite the many positives of the game, Turner reflected on areas the team can improve on.

“We need to be able to put together 60 minutes a little bit better than we did today,” Turner said, “I would have liked to see us be a little stronger in the third period, but we are still growing and learning. It is still the beginning of the year, and I think our kids will be good to take these details and implement them for next weekend.

Quinnipiac will pay the Bulldogs a visit in New Haven on Halloween. With today’s victory, the Bobcats are now 4-0-1 on the season, and look to prepare to open conference play in their game at Brown next week.