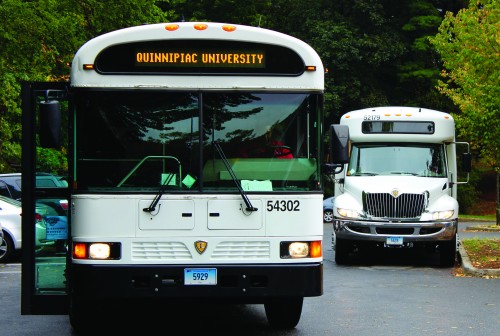 Last Wednesday at exactly 1:52 p.m., there were well over 50 students at the shuttle stop in South Lot. Presumably, many of these students had just gotten out of their 1 p.m. classes and were headed up to York Hill to relax, study or eat a lunch that didn’t come from the cafe. I was one of these students, but none of us got on a shuttle until 2:05 p.m. 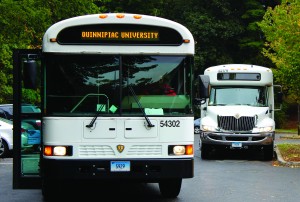 Now, you may be thinking, “Stop complaining, it was only 13 minutes,” but there were three shuttles in South Lot. THREE. And all of them were on break.

I’m not saying shuttle drivers shouldn’t get breaks. Obviously they should. But why can’t the people in charge of the shuttle schedules stagger drivers’ breaks, or plan breaks for less popular times? Or better yet, hire more drivers so the drivers can take a break but the shuttles can keep running.

When I finally got on a shuttle, we drove up to the Westwoods parking lot. You know, the parking lot that no one uses anymore. Why is there no system to call for the shuttle when you need one? It would be way more energy-efficient to only make detours to the Polling Institute or Whitney Village when someone requests a ride to or from there. Shuttles making these unnecessary routes wastes gas, increases carbon dioxide emissions and annoys students (or at least, me).

I have some perspective. I’m thankful for the slew of shuttles that regularly take me to my dorm, which is more than can be said for the international students living near the Hamden Plaza (see last week’s issue). But I’m still annoyed. –J. Cibelli