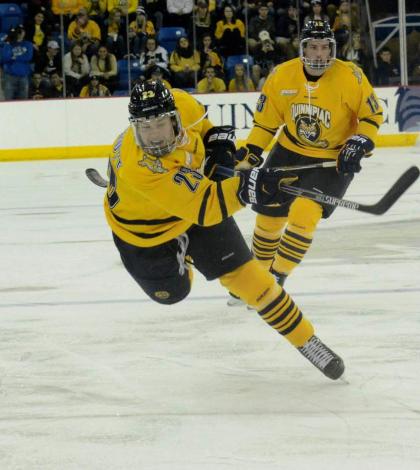 Qunnipiac men’s ice hockey won its second straight contest via shutout with a 4-0 victory over Maine on Tuesday night.

“I thought we were really into the game,” head coach Rand Pecknold said. “Our intensity was great. I thought we won races, won battles. It felt to me that we had more jump. That’s how I’d describe it.”

Quinnipiac’s power play continued its early season success in the first period. Chase Priskie brought the puck up the left side of the ice, broke past a Maine defender, and fired the shot past Maine goalie Matt Morris 12 minutes into the contest. 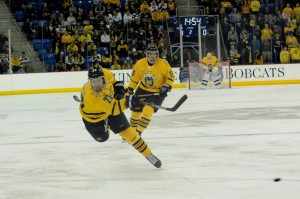 “I thought the power play had great looks and really did a nice job,” Pecknold said. “I thought both units looked good tonight, but I think any first goal, and definitely tonight, got us over the hump a little bit and we got confidence from that.”

Priskie’s goal was the first of his collegiate career. He said that although it was nice to score his first goal, it would not have happened on the play if not for his teammates.

“It feels good,” Priskie said. “I mean, I’ve got to give credit to the other guys on the ice because if they’re not talking to me then I don’t have a chance to pick my head up and make a play.”

Quinnipiac built on its lead five minutes into the second period. Tommy Schutt, too, scored his first goal of the season. K.J. Tiefenwerth gave Schutt a pass before he wristed a shot into the net from the right side.

Devon Toews got in on the action later in the period. For the second straight game, he scored a goal on a power play where he started with the puck behind the Quinnipiac net. Unlike his give-and-go with Soren Jonzzon on Thursday’s win over Arizona State, he scored this goal unassisted. He flipped the puck into a Maine defender’s stick at the opposing blue line, it dropped right at his skates, and he slid it beneath Morris to give the Bobcats a 3-0 lead.

Tiefenwerth extended Quinnipiac’s lead to 4-0 with 2:20 left in the period. He put a shot on Morris, got his own rebound, and fired it through the open left side of the net.

Goals were not the only thing that came in abundance in the second period. A number of skirmishes broke out between the teams. Soren Jonzzon went to the box for lodging Maine’s Sam Becker onto the ice. Maine’s Cam Brown then went to the box for another penalty just eight seconds after Jonzzon. Travis St. Denis and Maine’s Justin Rai each went to the box, too, after St. Denis dropped Rai to the ice in a post-whistle scuffle in front of the Bobcats’ net.

“You know, that’s just part of hockey,” senior goalie Michael Garteig said. “[Maine] went hard to the net tonight. They haven’t scored many goals in the last couple of games so they’re going to do whatever they can to either get in my head or get pucks to the net and try to crash one in.”

The scoreless third period capped off Garteig’s 50th career victory in net and his second straight shutout. He credited the defense for holding opponents to 35 shots over the two-game span.

“They’ve been a huge reason why I haven’t given up a goal in the last two games,” Garteig said. “I can’t take much credit for myself. It’s been a team effort.”

The 4-0-0 Bobcats host St. Cloud State for a weekend series on Friday and Saturday. Pecknold says that he is impressed by what he has seen from St. Cloud State in their meetings over the last couple of seasons.