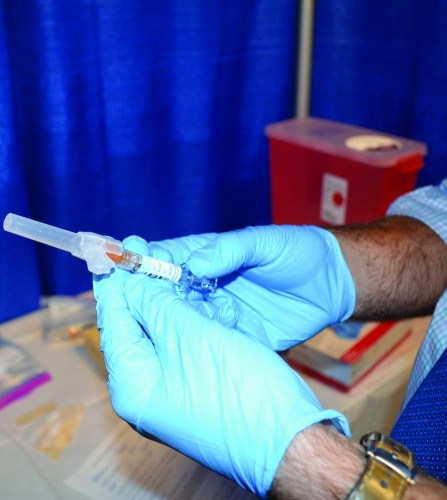 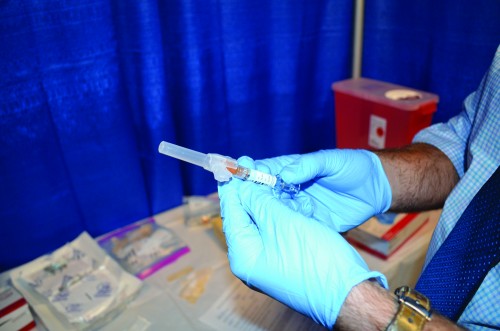 With flu season coming around, Student Health Services is making sure that the Quinnipiac community is well prepared by offering free flu shots.

There will be four upcoming flu clinics on Oct. 21 and Oct. 22 at the York Hill Campus, Nov. 3 in the Carl Hansen Student Center and Nov. 5 at the North Haven Campus. They are all open from 10 a.m. to 5 p.m.

The vaccines are free to students, faculty and staff, according to Director of Student Health Services Christy Chase. However, there is a limited number of vaccines available. The vaccines are on a first-come, first-serve basis, and clinics may close earlier than the listed 5 p.m. time.

If the school runs out of vaccines for the season, Chase urges students to receive a vaccine from a pharmacy. She wants people to understand the seriousness of the flu, despite it being common in a world where other illnesses can receive more attention.

“People would have wanted a vaccine for [Ebola]. Well, a whole lot more people die from the flu than Ebola in this country,” she said.

Senior Sara Olyaei, a biomedical science major, also understands the importance of having the flu shot. She says that it’s necessary to keep up with the vaccines so that, over time, one’s body is prepared for a variety of flu types.

Olyaei understands that some people may not vaccinate for moral reasons, but she doesn’t understand why someone wouldn’t get a vaccine otherwise.

“Would you rather sit down and watch TV for five hours and just like, end up doing nothing,  [or] you can get a vaccine and not expose yourself to any type of the flu,” she said.

Freshman Zoey Moniz is someone who doesn’t usually get a flu shot. She said that it isn’t because of any religious or moral views, but just that she hasn’t gotten it in the past and doesn’t see the need to get it now.

If people are afraid of getting the flu shot due to possible side effects, Chase said not to worry.

The virus within the vaccine is inactive, so the recipient cannot get the flu. Chase said the side effects usually include aches, swelling around the injection site, headaches and perhaps a mild fever. Any side effects that would happen would occur within two days of receiving the shot. If the recipient experiences discomfort, Chase said they can take acetaminophen or ibuprofen for it.

Junior Sara Jess was a student who was at an earlier clinic this semester. She said the only side effect she experienced was her arm being sore for the rest of the day.

Jess says she saw fellow undergraduates in the Health Science program administering the shots, some of whom she knows. Jess feels that it was a good idea to get the shot because she would not want to get sick while she’s away from her home in New Jersey.

“It’s awful. Your mom isn’t here to like, I don’t know, make soup and stuff. You’re on your own and you still have to do everything,” she said.

Along with having the vaccine, which takes two weeks to be active, Chase wants students to take care of themselves during the flu season, including good hand washing, coughing into one’s sleeve and being well-rested.

Even though the school isn’t required to provide for flu shots, Chase likes that the school puts in the effort to do so.

“I think they look out for the wellness of their students, and it’s a great service they provide, trying to keep the community healthy,” she said.