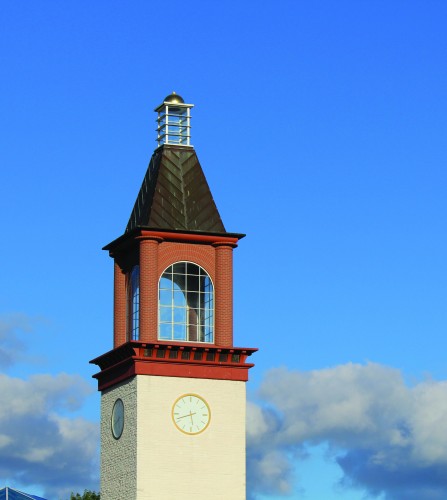 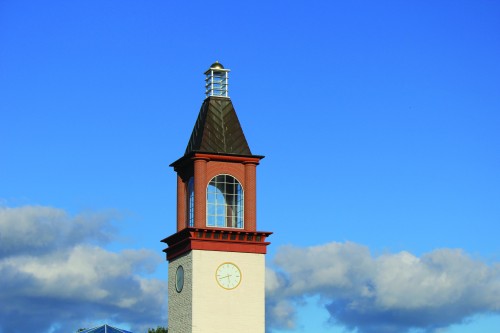 Across the Mount Carmel campus, sounds of music ring out at every hour from the clock tower on the Arnold Bernhard Library. While the library provides peace and quiet, its clock tower keeps people updated with the time through short jingles.

“When the Mount Carmel campus was proposed in the early 1960s, university officials had a different plan for the clock tower,” Woodward said. “The tower was going to be in the center of the Quadrangle and not attached to the library, but in 1964 or 1965, the government mandated that the tower had to be part of a building to qualify for government funding.”

Woodward said the clock tower originally contained a Carillon system, which is the part of the tower that actually plays the music, donated by the Nils Sahlin family. But the new Carillon system has digitized music that cannot be played by hand. This feature makes it impossible to replicate the clock tower music on the system.

A Carillon is a musical instrument that is composed of at least 23 Carillon bells, according to the Guild of Carilloneuers of North America’s website.

The only time the Carillon was ever played manually was back in 1976, for Hamden’s bicentennial firework display, according to Woodward. It was manually played by a faculty member from a keyboard that was formerly in Alumni Hall–now the piazza of the Carl Hansen Student Center.

Now, the music from the clock tower features tunes that originated from popular franchises.

“New music is added to the bell tower playlist every few years,” Woodward said. “The university’s senior superintendent of mechanical services goes through a music catalog and selects songs he thinks are reasonably recognizable.”

“For Halloween, they could play the Halloween theme or ‘This is Halloween’ [from ‘The Nightmare Before Christmas’],” Gentile said.

Junior Alexi Mangili, said that she too would like Halloween-themed music to play when the holiday arrives. Like Gentile, Mangili requested ‘This is Halloween’ as well as the ‘Monster Mash.’

The university’s method of choosing the clock tower music frustrates some students, like sophomore Felicia Duch.

Some students mentioned not being able to remember some of the songs, including Duch, who said that though the music is refreshing,  she wished there were more recognizable songs.

“I understand preserving tradition,” she said. “I just think that it’s also important to include newer songs.”

Duch suggested a song by Bruce Springsteen or the Jackson 5.

Other students actually do recognize some music, like freshman Austin Scudder.

“I think they played ‘Sweet Caroline’ once and I was loving it,” Scudder said.

Freshman Nivea Acosta said she likes the music, except at night.

“The music is really nice, but sometimes I find it really eerie during the later hours,” Acosta said.

But, despite that, Acosta said she appreciates the university’s efforts to offer students with unique musical snippets.

“What other universities have that?” she asked. “At least here you get to hear ‘The Godfather’ theme and ‘Star Wars’ and that’s a nice change.”

Acosta even requested for the clock tower to play a favorite of hers called, “Welcome to the Jungle” by Guns & Roses.

Freshman Nhung An said she would prefer if the clock tower played music from the musical “Les Misérables” since she has a love for musical soundtracks.

It is uncertain whether or not these requests can be implemented right away, but Woodward did confirm that the clock tower music won’t be silenced any time soon.

“The Carillion continues to play the music thousands of students, parents, faculty, staff and other friends of the university hear each time they step foot on the Quadrangle on the Mount Carmel Campus,” Woodward said.