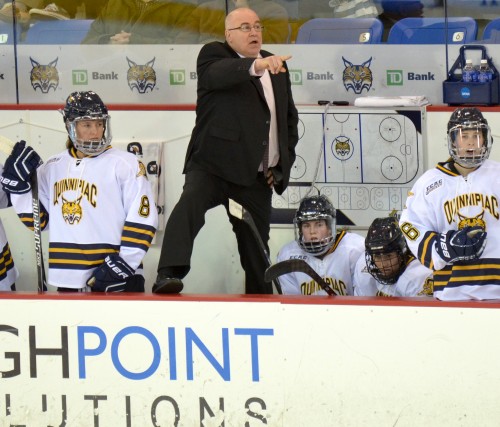 Rick Seeley, former women’s ice hockey coach, filed a lawsuit against the university which said he was wrongfully terminated on April 9, 2015, after allegations of verbal and physical abuse toward his players surfaced.

Seeley is asking for $15,000 in damages, attorney fees, punitive damages and interest, according to the lawsuit.

The lawsuit against Quinnipiac cited negligence, breach of contract and breach of covenant of faith and fair dealing as the defense against his wrongful termination.

Seeley was the head coach for women’s ice hockey at the university for six years before he was let go. He coached the women’s ice hockey team through their 26-9-3 record during the 2014-2015 season. Those numbers set a program single-season record.

“Under Coach Seeley’s leadership, the 2014-2015 Women’s Ice Hockey Season was the most successful season in the program’s history,” the lawsuit said.

Approximately three weeks after the 2014-2015 season ended for the women’s ice hockey team in early April, university officials confronted Seeley about allegations–including the allegation that Seeley had yelled at a student athlete and grabbed her by the chin strap on her helmet during a game.

“Coach Seeley denied any wrongdoing or that his conduct at the time of the incident in question varied in any significant way from his coaching conduct at any time during his several previous years of employment with Quinnipiac,” the lawsuit said.

The university is also accused of disregarding good faith to protect Seeley from harm by not investigating allegations before formally terminating him in the lawsuit.

Associate Vice President for Public Relations John Morgan said the university does not have a statement about the lawsuit at this time.

“The university does not comment on pending legal matters,” Morgan said.

But the university is not the only target of the lawsuit.

David Bills, a father of a former player of Seeley’s during his time as a coach at Clarkson University, was also named in the lawsuit. In an interview with Q30 Television last semester, Bills spoke on behalf of his daughter’s experience with Seeley as her coach, during the 2003-04 season at Clarkson.

The statements made in the Q30 Television article and the handwritten notes regarding the alleged abuse throughout the article were all false, according to the lawsuit. Bills’ actions are cited as “reckless disregard of whether the misconduct allegations were true or false.”

Seeley accused Bills of having knowledge of the falsity of his statements and information that he provided to Q30 Television and caused Seeley emotional pain and suffering, the lawsuit said. The lawsuit accused Bills of causing Seeley to lose income and benefits provided by his job because of his defamatory statements.

Bills is also accused of causing Seeley severe emotional distress and of interfering with Seeley’s employment contract with the university according to the lawsuit.