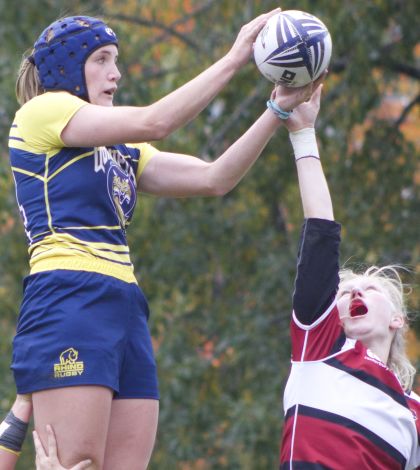 This Sunday, Quinnipiac women’s rugby played host to the Central Washington Wildcats. Following their 53-7 victory over Brown in their last outing, the Bobcats were looking to keep things going.

Despite a valiant effort, fighting from behind the whole game, Quinnipiac fell to the Wildcats 33-12, bringing an end to their streak. 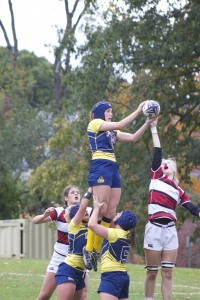 “We definitely played hard out there,” sophomore center Ilona Maher said. “Some things didn’t come together, but we’ll get back at it next game.”

Central Washington opened the scoring with a Hannah Lewandowski try 27 minutes into the first half, followed by a successful conversion.

The Wildcats would score again, putting the Bobcats behind 14-0 just five minutes before intermission.

Quinnipiac challenged Central Washington’s defense with a few long runs from sophomore flyhalf Flora Poole and junior fullback Maggie Myles. Their efforts would be denied by the Wildcats backs near the goal line.

“They are a solid technical and fundamental team,” Quinnipiac head coach Becky Carlson said after the game in an interview with QU Athletics. “They did the things right that they needed to.”

The Bobcats started the second half strongly, scoring their first try of the game. Ilona Maher muscled her way into the end zone for her 10th try of the season to cut the lead to 14-5.

The Wildcats then scored on two consecutive tries and one conversion to make it 26-5.

On the final offensive possession of the game, a costly interception would seal the Bobcats’ fate as Central Washington would solidify their 33-12 lead.

Following the game, Carlson discussed how opportunities were passed up on and that the loss will serve as a learning experience.

“We had some solid, good, positive, moments,” Carlson said. “Then we’d kind of take one step forward, two steps back.”

Despite the loss ending their winning streak, Carlson managed to find the silver lining in the game.

“We’re grateful for playing teams like Central Washington who seems to be able to pick out where and what exactly we need to work on,” Carlson said. “Then sharpen our strengths and figure out our weaknesses.”

Maher felt that the team’s effort level wasn’t the cause of their loss.

“We definitely played hard out there,” Maher said. “Just some things didn’t come together.”

With the loss, Quinnipiac falls to 5-2. The Bobcats play again on Oct. 22 against the American International College Yellow Jackets.