Turnover morphs into their new sound with ‘Peripheral Vision’ 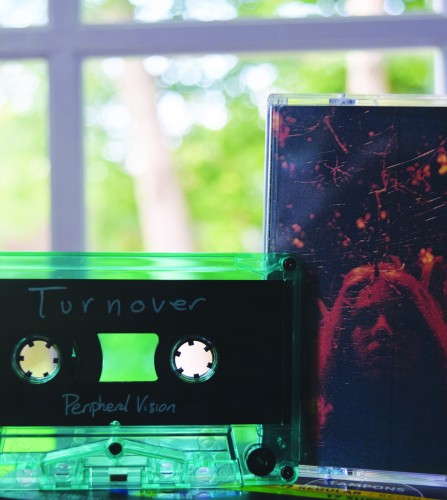 Turnover and pop punk used to be considered synonymous with one another, but the Virginia Beach quartet’s sophomore album “Peripheral Vision” is proving everyone and everything wrong.

The transition from pop punk to another genre was once impossible to get out of alive; sometimes it just doesn’t work. It can be a cringeworthy experience resulting in the band floating off into obliteration and eternal one-hit-wonder land.

Turnover’s first album “Magnolia,” which debuted in 2013 on the indie label Run For Cover Records, was cut and dry pop punk. It was good pop punk though, the kind that brought people together and was part of a movement much bigger than itself, while being able to stand on its own. They were quickly accepted into the scene and had made their mark in our hearts and iPods.

However, the genre has been changing throughout the past year or so. Bands like Title Fight and Citizen, who cemented what it means to be new era punk, have changed their sound and 2015 brought the release of grunge, shoegaze style albums filled with distortion and reverb. Although both band’s risky reinventions paid off well, fans were anxious to hear what Turnover would bring to the growing list of bands taking the same risk.

“Peripheral Vision” has created a new sound for the band, one that’s not hard to love. The easy listen exudes dream-like serenity and nostalgia, pulling you in with every note. Turnover proves with each album that they’re not afraid to grow, keeping in tune with the trends of the ever changing genre while staying uniquely honest. The sound that has been achieved in the album has seamlessly transformed Turnover into an atmospheric indie rock band.

This successful genre switch is gracefully guided by producing legend and Philadelphia native Will Yip. Yip has produced some of the scene’s greatest and most pivotally important records such as Title Fight’s “Floral Green,” Balance and Composure’s “Separation,” Citizen’s “Youth,” The Wonder Years’ “The Upsides” and Tigers Jaw’s “Charmer.” So it wasn’t a surprise when Turnover decided to work with Yip for a third time. Yip has been guiding bands through the transformation that the scene is undergoing, every time producing a successfully distinctive record for each band.

What makes “Peripheral Vision” so noteworthy is the overarching emotional honesty displayed through the vocals and lyrics. Lead vocalist and guitarist Austin Getz has never sounded better, producing a subdued yet powerful quality to the way he sings. Getz shows off a more mature side to the writing of the lyrics and gets his point across vocally in the same manner. Getz hasn’t lost his signature enunciated style of singing, even with the distortions throughout the songs. He’s also not afraid to be bold and incorporate personal stories into his lyrics.

The band hasn’t lost its punk roots, however. The moodiness and distorted guitar buildups echo some of the styles of their earlier releases, but it takes the sounds to new levels. Retaining qualities of the punk genre is what gives them that advantage to create a successful album.

“Peripheral Vision” has a shoegazey flow with airy, overlapping guitars. Warm and melancholy, each song pulls off an emotional weight backed by strong lyrics. The band doesn’t just carelessly add reverb to the songs; they carefully construct each instrument’s sounds into a cohesive composition with just the right amount of reverb. With clean instrumentals and light distortion, listeners can’t help but be completely compelled by the sweet sounds of the mellow atmosphere produced.

The album is filled with addictive singles to get lost in such as “Humming,” “New Scream,” “Cutting My Fingers Off” and “Dizzy on the Comedown.” The album flows smoothly from track to track, evoking various emotions in the listener.

Turnover has proven themselves to be a powerhouse of diversity, responsiveness and adaptability with “Peripheral Vision” that puts them on the list of bands to keep a close eye on. Turnover is an example of how to successfully mature a sound and change shape with a genre. The 11-track album was released on Run For Cover Records and is available for streaming on most free listening sites and for buying anywhere music is sold. Turnover is currently on a full American tour with Basement, an English melodic hardcore band and fellow Run For Cover Records labelmate, and The Story So Far, Pure Noise Records’ kings of pop punk.