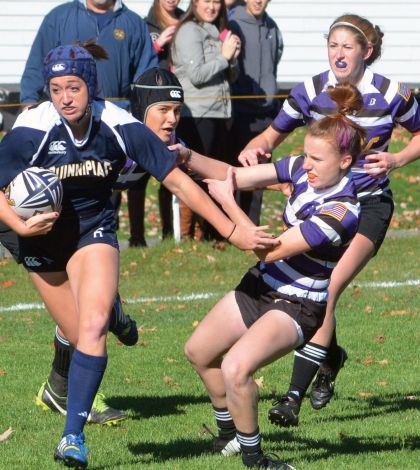 It took 12 grueling years, but NCAA Rugby will finally have a fall semester champion. 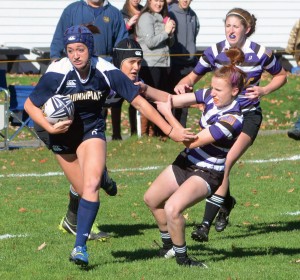 “There’s not a doubt in my mind that that trophy has our name on it because we have what it takes,” junior Hailey Wyatt said.

Wyatt’s confidence is understandably high, given the Bobcats 5-1 record. And now, because of recent developments, she’ll have a chance to compete for what she feels the Quinnipiac program deserves.

Over the years, Quinnipiac women’s rugby head coach Becky Carlson has watched other emerging sports accomplish the goal of implementing a national championship, and is pleased with rugby’s progress as a sport.

“Collectively, the teams have wanted to move forward with teams that are of like resources, coaching staffs, regimes and support of the university,” Carlson said. “It’s really creating that even level playing field for teams that are like Quinnipiac.”

Unlike the major sports at Quinnipiac, such as ice hockey and basketball, the Quinnipiac women’s rugby team competed against both varsity teams and club teams. Now, the fall season schedule consists only of varsity teams.

“This is the most competitive schedule in the country,” Carlson said of the 2015 slate. “It’s what these teams and players deserve.”

In order to get these players what they “deserve,” Carlson and others broke away from USA Rugby and formed the NCVWRA.

According to Carlson, USA Rugby was reluctant to sponsor the national championship, ultimately forcing a new organization to be created.

Aside from USA Rugby’s unwillingness to be the sponsor, the organization also clashed heads with varsity teams wanting fair play with club team competitors.

“It’s making sure that all teams are abiding by NCAA rules,” Carlson said. “It’s solidifying legitimacy. They will look back at this tournament and say this is where it started.”

Club teams do not have to follow any NCAA rules. They can speak to high school sophomores, handout t-shirts, invite them to camps and further relationships through social media because they have no NCAA recruiting rules to abide by.

The lack of regulations continue for players once they join a club rugby team. For example, they do not have to maintain a certain grade-point-average and attend mandatory study halls.

Along with the NCVWRA leveling the system for teams, Carlson thinks the new playoff format will expand the popularity of the game.

“The creation is for the game and the players,” she said. “But, it’s essentially for the growth of rugby and for high school kids to see a varsity championship in rugby. It’s for the parents deciding if they want their daughter to play rugby or soccer.”

The answer used to be just soccer because there was not an understanding or not enough opportunity at the higher levels to motivate someone to want to play it. It was a big step, a scary step. We basically thought if we ever want this game to have an impact in the USA or within NCAA space, we have to do it.”

While the organization’s creation will add a national championship and may broaden long-term success for the sport, not every club team is joining the organization, leaving mixed feelings among some players.

“It sucks knowing not all the best teams are a part of it,” Wyatt said. “But I know this is what it’s going to take so future kids that play rugby can play the best teams. This is the right way to go.”

“I just thought it wasn’t structured well and we weren’t getting the best of what we could get,” Maher said. “I wanted to play rugby in college, but so many teams weren’t serious about it. Now rugby is getting serious.”

Regardless of how serious some people consider the sport, Quinnipiac’s approach on and off the field will remain the same.

“We’ve established a culture here,” Carlson said. “If you look at Quinnipiac, I don’t think anyone ever expected us to have any kind of product because we were competing against teams that had a population much bigger than ours.”

The school is starting to become recognized on a national level for its rugby program, however.

“Some people that play against us can’t even pronounce our name, but that’s changing,” Carlson said. “We’re building a brand and marketing it and it’s because of the players.”

The Bobcats still have four games to play before the playoffs begin, but much like Wyatt’s confidence in carrying the trophy home to Quinnipiac, Carlson feels the team can become national champions.

“I’ve said [we would win the championship] since day one,” she said. “Some of the losses are what we are most grateful for. It presents adversity. We needed to have our weaknesses exposed early on and we’ve worked on them and corrected them in practice. I think the trophy is ours.”