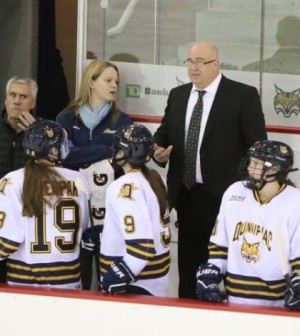 By Tyrell Walden-Martin and Julia Perkins

Former women’s ice hockey coach Rick Seeley is suing the university after he was fired last April, according to court records.

Seeley, who was let go in April amongst allegations of verbal and physical abuse toward his players, filed a lawsuit in September against Quinnipiac for breach of contract, breach of covenant of faith and fair dealing, and negligence.

Seeley held the position of women’s ice hockey head coach at the university from 2008 till 2015. Seeley is currently ranked 15th all-time in wins in NCAA women’s ice hockey history with 278 wins. Seeley coached the Bobcats to a 26-9-3 record during the 2014-15 season, which set a program single-season record for wins.

According to the suit, Seeley accepted a contract extension in February 2015 from Quinnipiac for five years. The salary of the contract would have granted Seeley $165,000 in his first year with possible increases on an annual basis. The contract also provided Seeley with a monthly $900 car allowance along with the opportunity to run a summer youth hockey camp that would compensate him at least $11,500 per season.

In the suit, Seeley said the university approached him around April 8 about allegations that he yelled at a player and grabbed her helmet chin strap during a game against Harvard. Seeley said in the suit he denied these charges, but was fired on April 9, without a proper investigation taking place. At the time, the university put out a press release saying the coach was resigning.

Seeley also filed a defamation suit against David Bills, a father of a former Clarkson University player who Seeley coached in 2003. Bills had told Q30 Television that his daughter was still in therapy because of the abuse she endured under Seeley.

Seeley’s suit says Bills’ statements and handwritten notes in the Q30 article were false. Clarkson University investigated these allegations, but discovered they were unfounded, according to the suit Seeley filed.