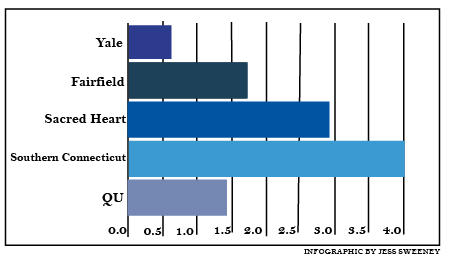 The default rate at which Quinnipiac graduates pay back their loans has decreased from 1.4 percent to 1.1 percent, according to a press release from Associate Vice President for Public Relations John Morgan.

The U.S. Department of Education calculated this percentage. It was based on 1,766 Quinnipiac graduates whose loans are currently in the repayment period. Out of the 1,766 graduates, 21 of those students are in a default.

A graduate with defaulted loans has failed to make payments on the loans as scheduled in the promissory note all students must fill out to apply for student loans, according to Federal Student Aid’s website.

Dominic Yoia, associate vice president and university director of financial aid, said students that do default on their loans tend to do so shortly after graduation rather than later on.

“Usually [students default on their loans] in the first or second year [post-graduation],” Yoia said.

The percentage decrease directly correlates with the rate at which graduates are getting jobs, according to Yoia.

“Our continued maintenance of one of the lowest three-year cohort default rates in the country suggests that our graduates are securing jobs with salaries comparable to the amount invested in their Quinnipiac education,” Yoia said in the press release.

The three-year cohort means that the measurement period to obtain the rate is based off of three years of post-graduate data.

Senior Matt Bell said students who default just might not understand how to handle such big financial responsibility.

“I don’t feel like students really understand finances that much,” Bell said. “I’m glad [the rate] is going down so hopefully students are getting more educated about their finances.”

The cost of attending Quinnipiac for this academic year, including room and board, is $57,090. Still, the number of graduates who default on their loans remains a small number.

If there are students struggling to repay their loans, they aren’t reaching out to the financial aid department at Quinnipiac, Yoia said.

“We don’t get the calls,” he said. “That’s not to say they [graduates] aren’t struggling, I’m just saying we haven’t gotten calls about it.”

But there are resources available to students prior to graduation to discuss financial options and payment plans, Yoia said.

Before students graduate, they must sit down for a one-hour interview with someone in the financial aid office to discuss loan repayment options, what it means to default, who to call if a payment cannot be made and even more information about loans, according to Yoia.

But Bell said he didn’t know this was something available to him.

“I think it’s a good thing, but I hadn’t heard about it,” Bell said.

In comparison to four nearby universities, Quinnipiac is among the schools with lower loan default repayment percentages, according to data provided by the National Center for Education Statistics.

Yale University graduates are at a lower rate than Quinnipiac graduates with a repayment percentage of 0.6 percent. But only nine of the graduate students are in default.

Fairfield University graduates follow closely behind Quinnipiac students with a repayment percentage of 1.7 percent with 14 students being in default.

The repayment percentage for Sacred Heart University graduates is 2.9 percent with 72 students being in default.

Southern Connecticut State University graduates have the highest repayment percentage at 4.0 percent with 126 students in default.