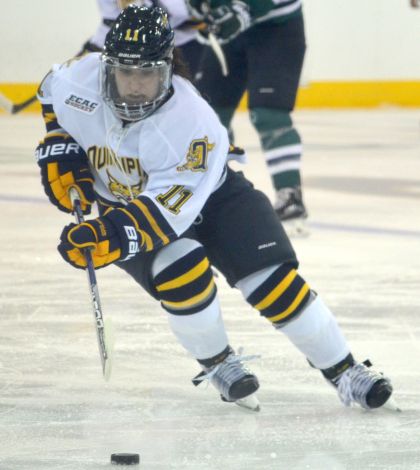 Despite the quiet rainy day outside, the atmosphere in High Point Solutions arena was full of energy as the Quinnipiac women’s hockey team matched up against Mercyhurst for the second outing of its season. 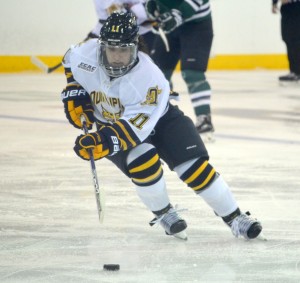 Quinnipiac was aggressive from the opening puck drop. It would pay off early, as last season’s leading scorer T.T. Cianfarano would place a backhand from a breakaway opportunity past Mercyhurst goalkeeper Jessica Convery for her first goal of the season, making it 1-0.

Mercyhurst would hang tough, though, as they scored off a rebound to make it 1-1 before the conclusion of the first stanza.

Then, with 2:51 left in the second period, Meghan Turner tucked a shot from behind the goal past Convery to give the Bobcats a 2-1.

Quinnipiac killed three penalties on the afternoon, and goalie Sydney Rossman made 25 saves in the win.

Despite the special occasion of it being Turner’s first win, the Bobcats’ new coach was quick to dismiss it as being more special than any other win.

“Any win is a good win, and they gave me the game puck, but tonight was really more about the team’s effort.” Turner described, “We had a number of players step up, Mercyhurst is a great hockey team, and because of the way we won will probably be the reason I remember this one.”