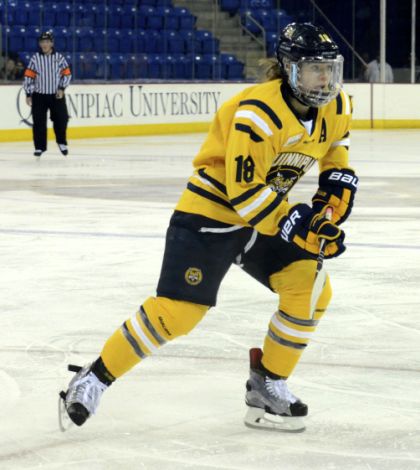 Quinnipiac women’s ice hockey tied Mecryhurst 3-3 in its season opener on Friday night at High Point Solutions Arena, after letting up a game-tying 6-on-5 goal in the final minute of regulation. 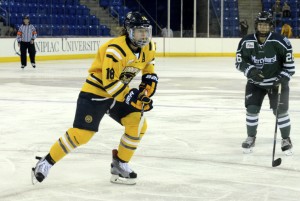 The game was Cassandra Turner’s first as head coach of the Bobcats. Although the team was 24.6 seconds away from claiming an opening night victory, she said she foresees good play from the team looking forward.

“I think the potential for this team is tremendous,” Turner said.

Quinnipiac came into the game a mere 1-12-1 all-time against Mercyhurst, with the only win coming in October of 2011.

Junior Emma Woods, who earned her 50th and 51st career points off of two goals in Friday’s game, said she likes having tough opponents in the team’s early schedule.

“We have high expectations for ourselves this year,” Woods said, “So playing a good team like that is exactly what we need to know where we fit in the season.”

Woods put Quinnipiac on the board first early in the second period. Sophomore T.T. Cianfarano, who was fifth in the nation in faceoff wins last season, won the faceoff and sent the puck back to Woods. Woods went on to slip as she shot from behind the right faceoff circle, but got the puck past Mercyhurst goalie Sarah McDonnell.

Cianfarano earned her first point of the young season with the assist. In the 2014-2015 season, the Bobcats went 19-1-0 when Cianfarano got a point.

“T.T. has such remarkable skill and talent. I think the combination of her playing with Woods and (freshman Melissa) Samoskevich is the jump for her.”

Samoskevich scored her first collegiate goal midway through the second period to double Quinnipiac’s lead. Senior Kristen Tamberg sent the pass to Samoskevich who launched a shot that beat McDonnell to the right side of the net.

Mercyhurst’s leading active goal scorer Emily Janiga shrunk the Lakers’ deficit to 2-1 with just over four minutes left in the second period. Janiga dove right to left in front of junior Quinnipiac goalie Sydney Rossman and flicked the puck into the top right corner of the net.

After Quinnipiac thwarted Mercyhurst’s first power play of the period, the Lakers tied the game with another goal by Janiga, who fired the puck past Rossman on the right side.

Quinnipiac, a team that set an NCAA record for fewest penalty minutes last season, committed three minor penalties in the second period. Turner said the team looks to improve on reducing penalties as the season goes on.

Woods struck again in the third period. Kosta sent the puck to Cianfarano on the left side before sliding the puck past McDonnell across the crease for Woods who put it in.

In the final minute of regulation, Mercyhurst pulled McDonnell for a sixth skater as the team was down 3-2. Mercyhurst’s offensive pressure was too much for Quinnipiac as Sarah Hine shot a still puck in from the crease.

The game finished a tie after a scoreless overtime. Turner said she was pleased with how the team bounced back in the extra period.

“They were trying to win the game in a way that was safe. That’s what we need in overtime. You don’t want to take chances in a way that lead to pucks in your net,” Turner said.

The team returns to action Saturday afternoon at home, with a second bout against the Lakers. Woods said the team will improve on lessons learned from the opening draw.

“We all know what we have to work on for the next game and I think we’re in the right state to bring that, so I have confidence in our team for tomorrow,” Woods said.