Too much to do 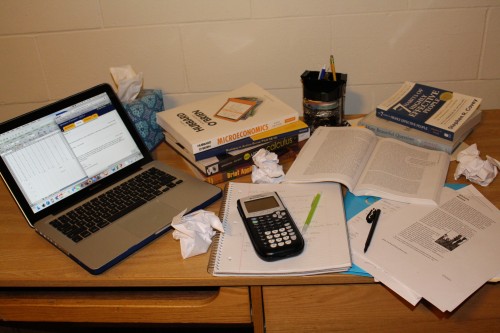 Students often turn to multitasking as a way to get more done in a day. Kerry Patton, a licensed clinical social worker in Connecticut and director of the health and wellness center at Quinnipiac, shared her thoughts on multitasking.

“We tend to think we will get a lot done in a short amount of time when we touch on one thing and go to the next thing, but I think if you really look at productivity, we aren’t really as productive,” Patton said.

Freshman business major Alexis Emanuilidis said it is hard for her to take time to do her homework, study, catch up on her shows and still have time to practice for dance. She is able to get more done by studying while eating dinner.

“Sometimes I leave the TV on while I am working on homework because I like the background noise,” Emanuilidis said. “I will also respond to emails and text messages on my laptop while I work. It helps me get more done.”

She is not the only student who thinks multitasking is helpful. Hadley Lane, a freshman political science major, also combines television and schoolwork.

“I always have a show on while doing homework. I can work in silence but I would prefer to have some background noise,” she said.

However, not all students claim they can multitask successfully.

“I can’t focus when I have Netflix on,” freshman Annie Brown said. “I need to have all my focus on my paper, otherwise I know I will end up messing up.”

Multitasking may seem like the perfect solution to fitting in more time to do what you want, but dividing our attention onto more than one activity can remove our full focus. The result is that, instead, each activity is done half as well.

According to the National Safety Council, simple tasks such as chewing gum while walking can be done successfully and simultaneously because only walking is a thinking task. In contrast, driving and talking both require thought, and so you cannot fully pay attention to either activity.

Patton explained how multitasking can result in stress. Taking on more than one activity, such as completing an assignment while on your phone, will drag out the process of completion and result in tension if the tasks aren’t accomplished. This is harmful to our mental health.

“Stress happens when we don’t produce what we expect of ourselves,” Patton said. “[This leads to] increasing blood pressure and anxiety.”

The solution to avoiding this stress is to apply our focus on one thing at a time. The Harvard Business Review explains this idea in a 2012 article, “The Magic of Doing One Thing at a Time.”

“The best way for an organization to fuel higher productivity and more innovative thinking is to strongly encourage finite periods of absorbed focus, as well as shorter periods of real renewal,” the article stated.

Patton commented on this idea as well.

“If we took the time to focus on each thing and be mindful of each task, I think it will help us feel more productive,” she said.

Patton acknowledged that multitasking is easier now that we often have many electronic devices near us at any given time. During the interview, she glanced down when her phone rang. She connected that moment to how having a cell phone in your hand while talking to someone can be harmful.

“We have the ability to always have someone to get a hold of us [via texting, emails or phone calls],” Patton said, pointing to her phone. “There are not as many opportunities to have as much quiet time.”