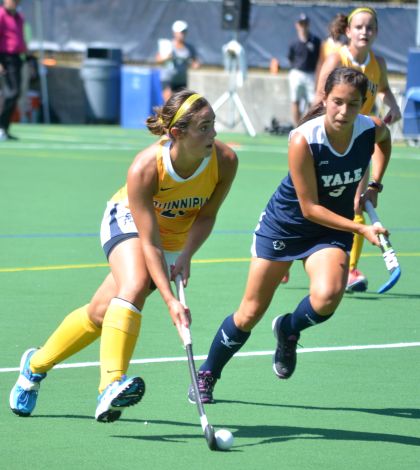 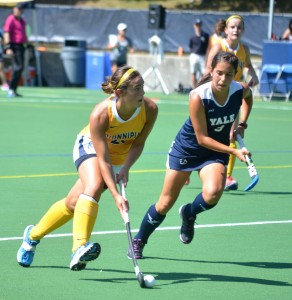 For Hamden native Savanna Reilly, donning the Quinnipiac blue and gold was always a dream.

“I’ve always been around the program because Quinnipiac is in my backyard,” Reilly said. “Even though the university was close, my parents said I could go anywhere. But the Bobcat field hockey girls were my idols, so I always knew I would end up here.”

Reilly was not able to play in an organized field hockey league until she entered her freshman year of high school, but physical sports still surrounded her childhood.

“I started playing ice hockey and lacrosse when I was 5, stopping before I began college,” Reilly explained.

Although the growth of ice hockey and lacrosse for female athletes has a litany of explanations, Reilly’s interest sparked while spectating her brother, Ellis.

“He was very athletic,” she said. “I always remember just wanting to be like my brother.”

For Reilly, the sports seed is planted much deeper in her family roots. The equipment manager for the Quinnipiac men’s hockey team and Reilly’s grandfather, Ed Maturo, introduced Savanna to hockey as a child.

“He used to take me and Ellis to all of the Yale hockey games,” she said. “He taught us the rules, while we watched and truly inspired us.”

Reilly took her grandfather’s knowledge into the backyard with her father and onto the streets of Hamden.

“My dad and brother made me take 100 shots a day,” she said. “Given that Hamden is a huge hockey town, we always played roller hockey with the kids on the block.”

After Reilly became too old to compete in games with her neighbors, she grasped the game of field hockey at Hamden High School.

At Hamden High School, Reilly stood out above all. In her junior year, she earned All-State first team selection honors, which helped her earn a scholarship offer to Quinnipiac.

Reilly’s head coach, Becca Main, said Reilly’s ability in her freshman season did not fit the bill of a Division I player, but Reilly embraced the role she was given.

A scout player is a player on a team whose task is to emulate future opponents for the starting players. These players are usually less athletically developed or less skilled players.

“She was redshirted because she wasn’t skilled,” Main said. “She came in doing things unorthodox and different. We made pretend she was the opponent. She took the role and was so passionate in her play. It made everyone around her better.”

Not only did Reilly galvanize respect from her teammates with intense effort as a scout player, but also her energy directed the attention of the coaches.

“When you bring in athletes really lacking the basics and tactical knowledge because they haven’t played       at
a very high level, they usually get a grace period,” Main said. “You get to feel them out and find what you can make them do.”

While Reilly’s “grace period” allowed her game to evolve more into what is deemed a Division I field hockey player, Main stopped trying to fully change Reilly’s play and said it is a “Dream come true.”

“We tried to correct her play for the first year and a half,” she said. “When someone is that athletic, she goes from being unorthodox and odd to being creative and gifted. You start to shift and say I’m going to stop trying to change this. She’s established a style.”

Reilly displays her creative style when it comes to goal-scoring. In Quinnipiac’s most recent win against Yale, the ball bounced off the player’s body and up into the air, Reilly corralled the ball and netted it through the goalie’s legs.

Main is impressed with Reilly’s style and knowledge of the game.

Since redshirting in her freshman year, Reilly landed a spot on the squad in her sophomore season. She didn’t produce a mass amount of points coming off the bench, tallying a total of six, but she did develop better field hockey acumen from her veteran teammates.

Last season, Reilly turned her bench role into a starting job and produced a breakout season, finishing second on her team in goals (six) and third in points (13), ultimately earning All-MAAC Second Team, a personal honor, which she attributes all to her team.

“The thing about personal awards is that it feels great when your hard work is recognized,” Reilly said. “But goals rarely come without assists and the ball touches 10 other sticks

before it touches mine. I think that although one person gets the award, the whole team participated in winning it. And that is more of a reflection on the team rather than one individual player.”

Named one of a few leaders on the Bobcats, Reilly has made adjustments, citing communication as the key.

“I like leading the team now,” Reilly said. “At first, it was hard because I was still focused on my game, and had a hard time focusing on everyone else. You just have to talk through it. You’re so used to being told where to go. Now, you’re telling everyone where to go. Just by instinct my game knowledge has gotten better through playing.”

With one more season to coach the Hamden native after this one, Main hopes Reilly will continue trying to take this program to the next level.

“We trust her because she works hard, and has set her mold,” Main said.