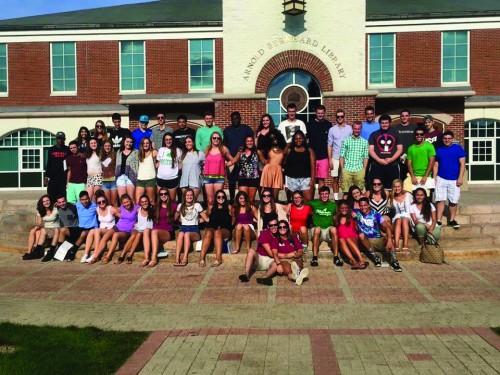 This past summer, Quinnipiac held multiple sessions of its annual freshman orientation. Over seventy orientation leaders greeted the incoming class of 2019 with a two-day welcome event, full of planned activities. This gave students a chance to meet new people and become familiar with fellow Bobcats.

Since the school year has begun, some freshmen have stayed connected with their OLs and orientation groups.

Freshman Abby Herman became friendly with a few of the members from her group.

“We mainly keep in touch through texting,” Herman said. “It’s nice to see a friendly face that I know once in awhile.”

Orientation encouraged students to create friendships that could last a lifetime. In a video shown before the activities began, students shared stories about the many permanent friendships they made during orientation. Incoming students were left with a mindset that the person sitting next to them could be a lifelong friend.

Freshman Matt Saberito said he had a positive orientation experience and continues to stay in touch with his orientation leaders and group.

Freshman Casey Hyman still keeps in close contact and has formed friendships with the students from his group. Their OLs have been trying to reunite everyone.

“We were going to go up the Sleeping Giant [together] but it never actually worked out,” he said.

Hyman also said he is excited to spend time as a group together in the future and liked how his OLs wanted to see everyone again.

Like Hyman’s group, not all orientation groups have stayed in close contact, often due to scheduling conflicts. Herman said her group has not texted or talked to each other as a whole.

“I haven’t spoken to my OLs since Welcome Weekend,” she added.

Freshman Alexandra Sabato said one of her orientation leaders, Brittany Bayne, tries to keep in contact with her orientation group, Nirvana, via Facebook. Bayne frequently posts updates for the freshmen, such as information about the recent Relay for Life and its registration link.

“We texted every day over the summer in the Nirvana group chat that was made,” Sabato said. “But it’s been dead since classes started.”

Common responses given when freshmen were asked if they stay in touch with the people from their orientation group range from, “Not really,” to “Some of them,” to “All the time.”

The friendships made at orientation are few but it’s enough just to recognize a face on the quad or at a party.

Not every freshman walked away from the event with a new best friend, and constant communication between an entire group is nearly impossible. However, some members of the Class of 2019 did form bonds that have allowed them to recognize a friendly face upon moving in and build a friendship from that.