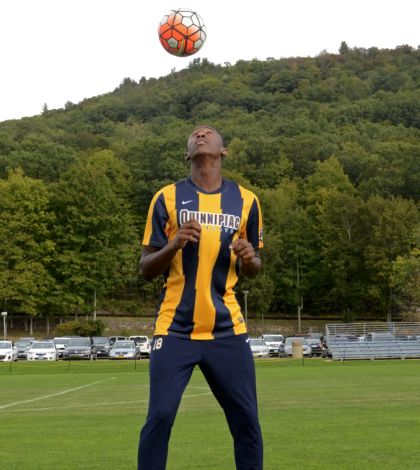 His journey began both in his driveway and on the streets of Jamaica–two spots Dally would ultimately display his raw talent.

“I remember my dad juggling the ball,” he said, referring to the activity called “juggling,” where a person kicks the ball into the air repetitively, alternating with each leg. “He would juggle to 10 and tell me he’d give me $10 if I juggled to 10.”

“Eventually I was juggling to 30 and then 100. He cannot do that anymore because he’d run out of money.”

Dally learned to play soccer on the streets of Jamaica with kids from his neighborhood.

“It was not organized playing on the road,” he said. “It was just me and a lot of kids trying to impress each other performing tricks and cool shots. We didn’t think of passing the ball and playing as a team.”

Impressing his peers was not the only reason Dally stuck with soccer. His father, Victor, played for the Jamaican premiere league, ultimately putting the game “in [Dally’s] blood.”

“My dad had a big name in soccer, so I decided to take it after him,” he said.

But the younger Dally envisioned bigger dreams for himself. In order to fulfill those fantasies, Dally and his father found themselves on a flight to the United States.

Dally landed in Bloomfield, Conn. at age 9 and, like many transitions, the move was tough.

“When I first came to the United States, it was just me and my dad,” he said. “My mother stayed in Jamaica and I missed her so much.”

By the time he was 12-years-old, Dally’s entire family called America their new home. With everything seemingly in place, Dally felt a strong burden on his shoulders.

“My mom had a successful business in Jamaica, but she gave it all up,” he said. “It means a lot to me and I will never forget that. Her only wish is for me to pay her back in goals.”

While the payment requires some big scores, Dally has delivered throughout his career in soccer.

In 2012, Dally tasted victory for the first time, winning a state championship for Bloomfield High School.

But Dally cites his transition to Watkinson School as a critical change that made him a better person and player.

“I thought Watkinson gave me a better opportunity in terms of education and could get me into college,” he explained.

And while the sights of championship trophies vanished, Dally took on more of a leadership role with his teammates at Watkinson.

“The soccer team in Watkinson helped my game out a lot because it wasn’t as strong compared to Bloomfield,” he said. “I had to become a leader and help coach a lot of the players. I had to learn to trust my teammates and had to understand I could not do everything. I had to be more patient.”

Dally deemed his experience successful and carried his new approach toward his summer team, the Connecticut Football Club. The results translated, as Dally and his team collected the Connecticut State Championship hardware in three consecutive seasons.

Three championships in the last three years for the Jamaican midfielder, and winning is a feeling that never gets old.

“It’s the best feeling in the world,” he said. “That’s why there is a score. It’s why I go hard in practice and train when I’m at home. I do everything I can to set myself to win come game day.”

Dally embraces these awards but prioritizes them accordingly.

“I value personal awards a lot because it’s a good feeling to know you’re the guy the team is depending on,” he said. “It’s a lot of pressure but it pushes you to become a better player.”

Dally, however, prioritizes the team before himself.

“The team always comes first. At Quinnipiac, the name on the jersey is bigger than every single one of us and it will always be that way, but we’re all competitive and always competing for something.”

Before he played in his first game or practice for the Bobcats, Dally feared the anxiety of what comes with playing at the collegiate level, but cited playoff games for his high school and club team as an avenue to settle himself down.

“My experience playing in big games definitely made me less nervous about playing in college,” he said. “I just remember the butterflies I would feel in my stomach before each of those games.”

And if the nerves do not subside by the start of the game, Dally always has some friendly faces in the crowd.

“My parents are always there,” he said. “I like when my parents go to my games. I could always hear my dad’s voice. It really gets me hyped. Just seeing them turns a switch on in my mind. It’s one of the reasons I chose Quinnipiac because it is not too far from home. It’s not too close either. It’s a perfect balance and my parents can come watch me play.”

So far, in his brief tenure with the Bobcats, Dally has noticed significant differences from club soccer to college soccer.

“It’s a lot more physical and faster,” he said. “But, it will get the best out of me and hopefully I’ll reach the next level.”

But, right now Dally is focused on his four years at Quinnipiac and his expectations for this year and his career.

“We’re a good team with high expectations,” he said. “It’s a great feeling. We have a lot of senior guys on the team that have more experience and have won. Our goal is to win the MAAC Championship this year, and hopefully for me, we can do it the next four years.”