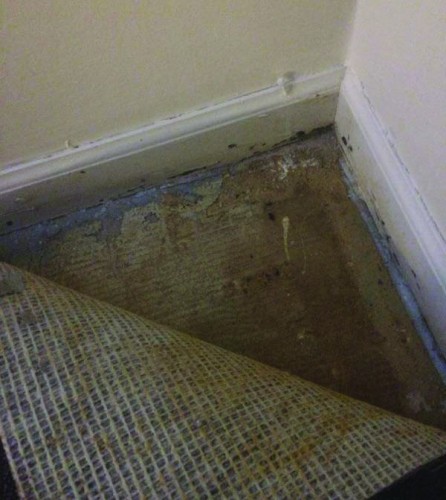 When senior Rebecca Castagna moved into Whitney Village on Aug. 16, the last thing she expected to find was mold.

Whitney Village is an off-campus housing option for seniors. Located on Whitney Avenue, it is comprised of eight buildings with a total of 50 air-conditioned apartments.

Thinking that the smell may have been the result of the room’s vacancy during the summer, Castagna and her parents began moving in her belongings. During this process they discovered the room’s dehumidifier and stovetop were broken.

“When I put in the work order, I said that I had asthma and [the dehumidifier] needed to be fixed,” Castagna said. “We went out and bought a $200 dehumidifier just so I could breathe that night, but I could tell that my parents were very upset about leaving me there alone.”

Over the next 12 hours, Castagna discovered large spots of black mold in a bathroom drawer and under the carpet. She texted pictures of the growth to her roommate’s mother, who showed them to a professional cleaner to confirm that it was mold. 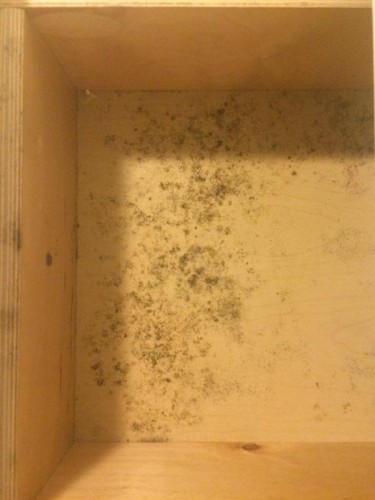 Living in a mold-infested area can cause a variety of negative health effects, including nasal and sinus congestion, headache, respiratory problems such as wheezing and irritation of the eyes, throat and skin, according to the New York State Department of Health. These effects are intensified for people with asthma such as Castagna.

“I was horrified,” Castagna said. “I don’t know if [Quinnipiac] cleans the rooms or what they do there, but there’s no way someone walked into the room I was in and thought ‘this is livable’ and thought seniors—or people in general—should be living here.”

Castagna slept in the room for one night before moving out. But her story is one of many; several seniors decided to move out of Whitney Village this year after finding unsatisfactory living conditions.

Senior Tanner Harding originally planned to live with Castagna and another senior, but their roommate trio was split up once they learned of the mold growth.

“I’ve always thought of Quinnipiac as a school that wanted to take care of its students and give them the best, but after the Whitney Village fiasco and how it was handled, that clearly is not the case,” Harding, who now lives on York Hill, said. “It was really disappointing to me to be treated this way, especially with how much money we pay for room and board.”

The cost of living in Whitney Village is $7,500 a semester. Each apartment contains one, two or three bedrooms in addition to a living room, kitchen and bathroom. Residents do not receive a meal plan, but have access to wireless Internet, cable television and laundry facilities.

Associate Vice President for Facilities Operations Keith Woodward said there were two spaces in Whitney Village with “low levels of mold” before students came back to campus. One was in a bathroom drawer, caused by a leaking sink. The other was on some furniture, caused by a dehumidifier and an air conditioner that shut off. These areas were cleaned, he said.

Senior Brynn Kelly was scheduled to move in on Aug. 21, but moved out in less than an hour after smelling mold and discovering a missing shower head, crusted substances on the bathtub, outdated appliances and a closet that appeared to be patched up with random pieces of wood.

“My mom and I were walking around, we were looking at this place and we just thought something was up,” Kelly said. “You walked in and you got this whiff of mold—it did not smell right. It’s just so dark and dank down there…My mom’s not one to complain, but we walked out and said, ‘I just can’t live in here.’”

Like Castagna, Kelly was shocked that university officials thought that Whitney Village would provide adequate housing for seniors.

“They told me that they checked everything out; they said ‘We just went through all the apartments and they all look fine,’” Kelly said. “But from what we saw, we were just not happy. They should not allow students to live in the basement.”

Although students who moved out received a refund for their $500 room deposit, some were unhappy with how their complaints were handled. In addition, more seniors were placed into the basement rooms after Kelly and Castagna moved out. 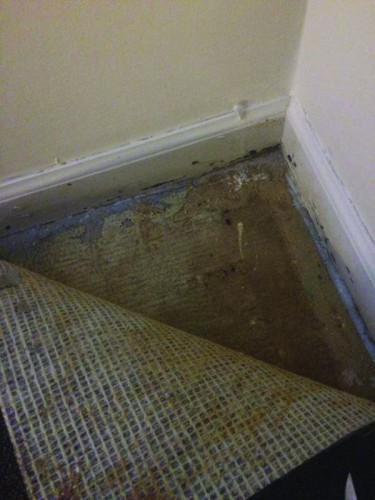 “Although Melissa [Karipidis, the associate director of residential life] relayed that the people who inspected the apartment conceded that it had not been appropriately cleaned, to date there has been no follow-up from Residential Life or the vice president of facilities regarding our concerns and experience or any comment with respect to the inconvenience,” Castagna’s mother said in an email.

Other students who were assigned to live in basement rooms, such as senior Daniel Menard, found disturbing living conditions but decided not to move out. Menard discovered a missing kitchen cabinet door, a dysfunctional humidifier and spots of white mold on the living room couch.

He said Facilities workers informed him that the university had “ran out” of cabinet door replacements, and the mold was due to a “humidity problem” that occurred over the summer.

“I was freaked out at first,” Menard said. “I was like, ‘Why would this happen, don’t they check rooms before people move in?’ You’d think that the situation would have been handled prior to me arriving. I still haven’t sat on those couches.”

He also is concerned about the storm cellars located in each building. The cellars do not contain drains, and only a wooden door separates the basement rooms from the outdoors.

In Menard’s room, there is a gap between the door and the ground. He has covered the space with towels but worries about what will happen when the weather gets colder.

“The gap is probably half an inch tall but still, bugs and water can seep in with any amount of space,” he said. “I’ve actually killed a decent amount of spiders—maybe five in the first week of classes, and that’s when I covered the gap. If [there are gaps] in other apartments too, then there are probably tons of bugs coming in.”

Even seniors who are not living in the basement have found problems such as chipped paint, broken or missing doors, hooks falling off of the walls and broken stovetops.

Senior James Anderson said he was “pumped” to live in Whitney Village, but now worries that he is breathing in mold and warns other seniors to reconsider their residential options.

“Don’t believe a lot of what is supposedly ‘great’ about the opportunity to live there,” Anderson said. “In theory it sounds great; you’re not getting the ridiculously priced meal plan, you can cook for yourself, you get your own bedroom, it’s air conditioned…but then you get there and there’s so many nonfunctional things that you realize QU neglects it.”

CORRECTION: This article was updated at 1:45 p.m. on Wednesday, Sept. 23 to reflect that Castagna’s father, not mother called Residential Life. The article also originally reported that Castagna stayed in the Whitney Village room for 12 hours, but she spent one day there.