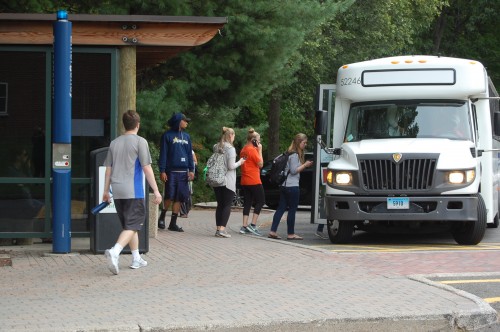 Health Science, nursing and education students will be able to take a shuttle to the North Haven campus starting Monday, according to Chief of Public Safety Edgar Rodriguez. 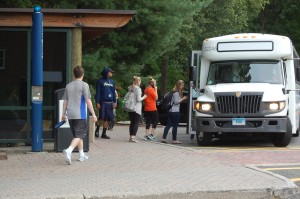 This change is something the university has been discussing for the past couple years, Rodriguez said. Now that more sophomores are taking classes on the North Haven campus, he said it is the time for the university to add the shuttle.

“It used to be juniors and seniors only [going to North Haven],” he said. “I think we got to the point where we have some sophomores and some of the international students that are going down this way…We think it’s a great opportunity to provide the shuttles and I’d rather have them get on the shuttle than drive their vehicle, especially when the weather gets worse.”

This change will not affect the number of shuttles running from York Hill to Mount Carmel, Rodriguez said.

“We’re not taking away anything we have now. This is an extra shuttle that’s being added for this purpose,” he said.

Senior physical therapy major Erica Peters has one class on the North Haven campus. She said she is glad about the change.

“I think that would be so helpful especially since I have to drive someone every week and she doesn’t have a car,” she said. “And so I’m making her pay but I feel really bad because she’s my friend and I don’t want to have to make her pay. It’s only 20 minutes away, so I really think that’s a great idea.”

If students had class on North Haven, they were required to have a car or carpool with their classmates to the campus that is the home for the School of Health Sciences, School of Education, School of Law and School of Nursing. The university has not provided a shuttle in the past because it was mainly juniors, seniors and graduate students who had to go to the campus, Rodriguez said.

“We had a lot of seniors at the beginning that were going down to North Haven,” he said. “And for example, nursing [students]…after that they had to do their clinicals. Some of the teaching students had to go to schools and do their practicals and stuff like that so at that point you almost kind of needed a car.”                      .

But as university officials looked at the number of people going to the North Haven campus within the first month of classes this academic year, they decided to provide this service, Rodriguez said.

“We didn’t have the demand several years ago, but I think that has changed in the last couple years,” he said. “I think the university is very proactive so I think this is great great news for our students who are taking classes at North Haven.”

Rodriguez said when the service first begins the university will likely run a smaller shuttle, but if demand increases Public Safety can get one of the larger shuttles. He said hopefully a lot of students will take advantage of the shuttle on Monday.

Freshman Rachel Hickey, a physical therapy major, said she is happy she will be able to take a shuttle to North Haven when she has classes there.

“That’s awesome. I don’t need a car now,” she said. “And my car is a little clown car so I would be nervous because my car is prone to breaking down. I think it’d be good to have the shuttle.”
Stay with The Chronicle for updates.