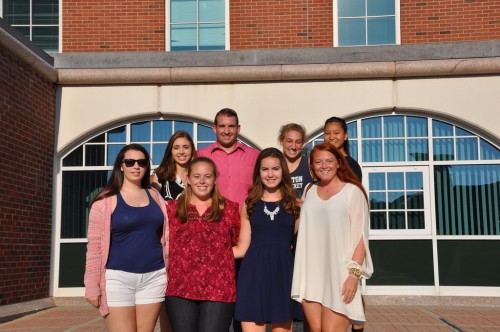 Ten of the SGA candidates

With 25 candidates running in the freshman Student Government Association (SGA) elections, the Class of 2019 has been inundated with lollipops, TV channel guides and flyers telling students who to vote for on Tuesday.

Elections are on DoYouQU, and the polls are open Tuesday between midnight to 8 p.m. Freshmen will be prompted to vote on their homepages and they can vote from that link. Candidates will find out the results between 8 p.m. and 10 p.m., Tuesday evening.

In the past, SGA has seen about 60 percent voter turnout, and are expecting between 60 percent and 70 percent turnout this year, according to Vice President of the Student Body Carly Hviding. This year’s freshman election could go down in Quinnipiac history because, according to Hviding, there has not been a female freshman president in the last 10 years. Seven women and three men are running for president.

Candidates are trying everything from social media, to t-shirts, to cardboard cutouts to catch the attention of their classmates. But nearly all the candidates went door-to-door to share their ideas with their peers.

“You have to be personal,” he said. “You can’t expect to run for office and hide behind a Facebook post. You have to meet the people you are representing.”

As of Friday, he had spent 18 hours on his campaign because he said he wants to improve the quality of life for students at the university.

Allison Kuhn, freshman vice presidential candidate and member of the women’s lacrosse team, has spent two to three hours each day walking around residence halls, talking to students and trying to learn names. She made flyers and has spent $60 on handmade posters. She also gave 30 visors to her friends and lacrosse teammates.

“I would be a great addition to the SGA team because I know when to lead and when to follow. Being part of the lacrosse team has helped me work well with others and get the job done,” Kuhn said.

Kuhn and other candidates are also using social media to get their name out there. Social media has been the main tactic for candidate for vice president Tyler Culp. Although candidates are allowed to spend $150 on their campaigns, Culp said he has not spent a lot of money so far.

“It’s more about who you are as a person,” Culp said. “You should be able to show who you are without the money aspect.”

Meanwhile, others use comedy to attract students.

Presidential candidate Joseph Iasso’s flyers were inspired by Java John and his famous catchphrase “Tap it.”

Kimberly Ellsworth, who is also running for president, is working the nostalgia angle with the motto: “Anything is possible with Kimmie,” a reference to the Disney Channel show “Kim Possible.”

Cameron Burbank, who is also running for president, made a cardboard cutout of himself and put it around the Carl Hansen Student Center.

As an entrepreneurship major, Burbank said he is used to coming up with innovative ideas like the cardboard cutout.

“I have a lot of ridiculous ideas,” he said. “That’s actually why I’m an entrepreneurship major because I have all these ideas and half of them are so farfetched that they’re not even worth considering.”

Burbank also made t-shirts with his face on it to give out to students.

Many SGA aspirants have given up the traditional campaigning method of printing and hanging posters and flyers and have simply been talking to people.

VP candidate Ryan Hicks is a perfect example of this new campaigning method.

Megan Moyse is taking a more traditional campaigning route. Some of her campaigning methods include hanging up flyers, going door to door and handing out beach balls to create a “fun way to get the freshman class aware of the election and my role in it.”

“I plan on representing the freshman class to the best of my ability by fighting for their ideas whether I agree with it or not as well as putting in the time to try to make the next four years fun,” Moyse said.

Check out this piece for more from the candidates.

CORRECTION: This post was updated at 2:30 p.m. on Tuesday to reflect that there were eight candidates in the photo, not 10.