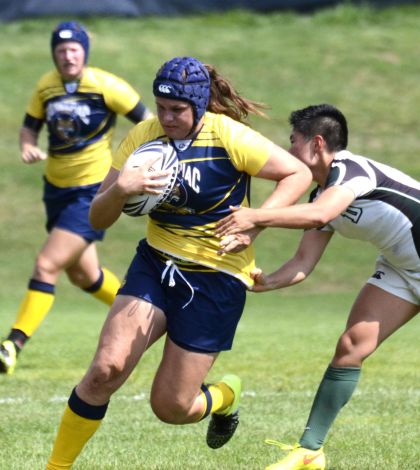 Quinnipiac rugby won its fifth-straight home opener behind three tries from freshman Emily Roskopf in a 43-5 trouncing of the Dartmouth Big Green on Saturday afternoon.

“We started off slow,” Roskopf said. “But once we looked around and realized how many people were here to support us, it energized us more.” 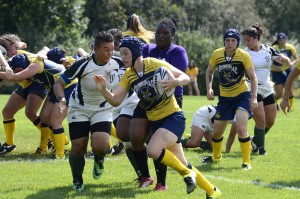 The Bobcats came off a 29-24 defeat to Army last weekend, where Army took its first and only lead of the game with a try in stoppage time. Head coach Becky Carlson said that the Bobcats came out against Dartmouth looking to get back on track.

“I think it wasn’t so much they came out here with something to prove,” Carlson said. “I think they came out wanting to get back onto their feet after the loss against Army.”

The Bobcats fell behind 5-0 after Dartmouth sophomore Lilie Zhang scored a try with an assist from senior Yejadai Dunn. Roskopf said the early deficit came around to help the Bobcats.

“It woke us up,” Roskopf said. “We can’t take this for granted. We have to work as a team to push forward.”

The Bobcats made an emphasis to keep the Big Green out of the endzone for the remainder of the contest.

Quinnipiac took its first lead after Roskopf got her first try of the contest. Roskopf got her second try off a bounce from a Quinnipiac punt that she took into the endzone after blowing by Dartmouth’s backline.

“Emily has a speed- it’s 100 miles per hour. She doesn’t quit,” Carlson said of Roskopf, who now leads the Bobcats with eight tries through three games.

Junior Madison Gegeckas, who went 4-for-7 on conversions in the game, sank her two first half conversions to give Quinnipiac a 14-5 lead into the break.

Although Quinnipiac had scored 14 unanswered points going into halftime, Carlson still used the break as a time for adjustments.

“At halftime, we decided to make it more of a collective effort and basically put that game back on them,” Carlson said.

The Bobcats shutout the Big Green 29-0 in the second half with tries from five different players.
Junior Maggie Myles got it started with a try inside the first ten minutes of the half. From there, Roskopf completed her hat trick before sophomores Ilona Maher, Karee Helgerson, and Flora Poole got tries of their own to secure Quinnipiac with the 43-5 victory.

Roskopf said the team play in the second half is something that is taking shape for the Bobcats.

“I think getting more comfortable with each other really helps us to build and work better. We improve our play off of each other,” Roskopf said.

Quinnipiac’s next game is Saturday against Norwich University in Northfield, Vermont. The match is set to begin at noon.

Carlson said that despite getting back on their feet, the Bobcats are only looking forward.

“Going into the next game, I think there is good, positive energy. We’re playing Norwich. We’re just looking ahead right now,” Carlson said.