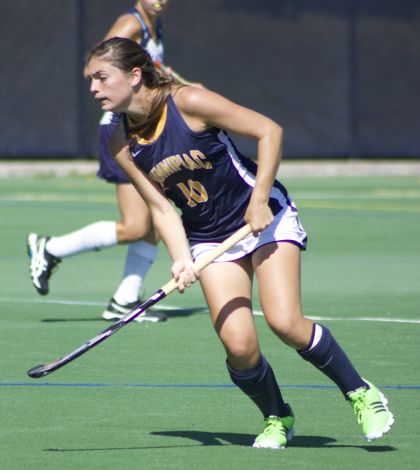 This marks the third straight loss for the Bobcats and now makes them 1-6 this fall while the Black Bears improve to 6-1 after winning their third straight game.

Maine got on the board early after senior Marissa Shaw scored an unassisted goal just four minutes in.

The Bobcats offense started the game of slow offensively and did not record a shot on net until senior midfielder Meghan McCullough scored with 3:32 left in the half. The goal was assisted by sophomore forward and defending MAAC Offensive Player of the Week Michelle Federico.

The Black Bears would score their second goal, and what would eventually be the game winning goal, just a little over twelve minutes into the second half when junior forward Danielle Aviani put one in the back of net.

The Black Bears would add two more goals in the final minutes, one coming from senior forward Jessica Skillings and another one from Aviani.

“Yeah it’s great” said King of her achievement. “In hindsight I’m sure I’ll be happy about but right now it’s not the best feeling because we didn’t win.”

“To follow up what she did last year is pretty exciting,”  Main said. “I used to say that I’m not sure if I want to lead in that because it shows too many shots but Angie’s time and practice put into it makes her deserving.”
The Bobcats next matchup will be next Tuesday at home against the Holy Cross Crusaders who are 4-3 this season.