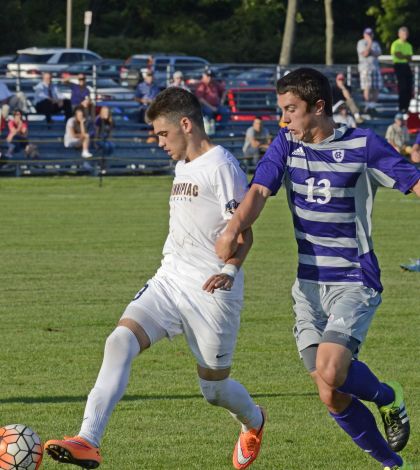 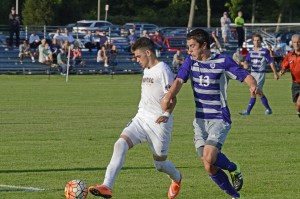 Both teams played well defensively in the first half, as the game went into halftime scoreless. However, coach Da Costa highlighted that his team could have easily been down 3-0.

Quinnipiac goalkeeper Triston Henry made three saves in the first half, but none better than the two he made on the same play.

On that play, Henry made a diving save. A Holy Cross player followed up on the rebound and tried to score. While still on the ground, Henry kicked away the second attempt.

Henry wasn’t perfect on the afternoon, however. Nicholas Cestaro put one past him with 30:20 remaining in the second half.

Holy Cross scored again on a penalty kick and went up 2-0 with 20:50 remaining in the second half. But Quinnipiac answered right back less than two minutes later after Diaz found the back of the net.

It was the Bobcats second goal on the season and their last goal of the day.

For the final 18 minutes of the half, the Bobcats were scrambling to score a goal, but with 35 seconds left, they gave up what Da Costa called a “very soft and cheap goal.”

“Until that clock hits zero, I want my guys to compete whether the score is 15-0 or 0-0 and we did not do that,” Da Costa said. “It is something that will resonate with me and something we will address.”

Da Costa also plans to address the Bobcats’ continuous struggles on offense. The Bobcats scored once on nine shots. It was their second goal in five games this season.

“We are five games into this [season] already and it should be better,” Da Costa said. “Not converting on the offensive side of things when you have clear chances and throwing the game away in the second half is well beneath our standards.”

Da Costa believes the Bobcats will be better as they look to bounce back when they visit Yale on Saturday at 7 p.m.

“We are not that far off. Individual mistakes we can correct. These things balance themselves out over time.”