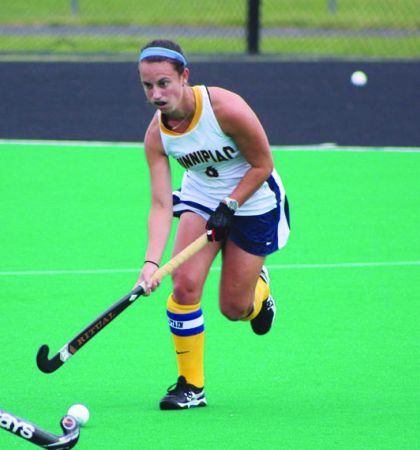 Since joining the Quinnipiac field hockey team five years ago, Megan Osanitsch has fought for everything she has earned. From walking on the team and coming back from an injury, Osanitsch has earned the captain spot.

However, a five-year career with the Bobcats was not Osanitsch’s original plan. Yet, she has turned a career which began with an ankle sprain early in her freshman year into one where she is a big part of Quinnipiac’s defense.

“Being a fifth-year player, I feel that I am someone that the younger players can trust,” Osanitsch said. “I have been through pretty much anything you can throw at a person in their four years of playing.”

Osanitsch grew up in Harwinton. Before she played field hockey, she played soccer, lacrosse and danced. It wasn’t until she went to Lewis Mills High School that she even knew the rules of field hockey. Once she got to the school’s preseason camp, her coach, Maggie Tieman, inspired Osanitsch’s career.

“Maggie (Tieman) coached at the camp, I fell in love with it, I tried out for the team, and it jumped off from there,” Osanitsch said.

She faced three different options coming out of high school.

The first was playing field hockey at Bryant University. The second was attending and potentially walking-on to the Quinnipiac field hockey team. The third was entering the Coast Guard Academy.

Osanitsch comes from a military family. Her dad was in the Army and served in Desert Storm, her uncle is an army veteran and her cousin is a Marine. She says the mix of her upbringing and academic opportunities at the Coast Guard Academy made it a consideration.

“It’s a mentality of discipline, honor and respect that I grew up with. Any of the military academies have some of the best education you can get. That was a draw for me,” Osanitsch said.

Osanitsch ended up going the field hockey route despite having to walk-on at Quinnipiac and attend the university without a scholarship. Quinnipiac head coach Becca Main said once she saw Osanitsch play she put the offer on the table.

“She is not someone we highly recruited, gave a scholarship offer to, or pursued,” Main said. “We [the coaching staff] were like, ‘You’re good. We really want you. If the school is a fit, let’s come here.’”

Main said she planned on Osanitsch being an important player on the team her freshman year. However, while running a scrimmage drill during a normal practice, the entire outlook of Osanitsch’s Quinnipiac career was thrown up in the air.

Main decided to make Osanitsch a medical redshirt for her freshman year. Since she had not played beyond the first fourth of the season, she was eligible to redshirt which now allows her to play in her fifth year.

“We had a discussion, me and the coaching staff, that I would be red-shirted,” Osanitsch said. “There probably wasn’t going to be any way that I would come back for much of the season at all, and if I was, it would have been postseason.”

Osanitsch has since earned a four-year scholarship and been on the field ever since for the Bobcats. After starting all 21 games for Quinnipiac her junior year, she played every minute of her senior year. According to Main, nobody on the team wants to see Osanitsch leave the field.

“She plays both ends of the field. Sometimes I forget that she probably needs a break. I’ll look over and ask, ‘Does Meg O. need a break?’ and everybody turns and goes ‘No, she’s fine,’” Main said.

In her 1,390 minutes on the field in 2014, Osanitsch helped lead Quinnipiac’s defense to the top of Division I Field Hockey with 13 defensive saves as a sweeper. Osanitsch says she is gratified to have helped the defense earn the national accolade.

“I contributed to it and they’re my backfield, and I am so proud of them for it. But really they did most of the work for that,” Osanitsch said.

This year, Osanitsch is not only using her experience during games. She says she leads by example in order to create a culture for her teammates.

“I want to better myself and want the girls to see me doing that because if they think ‘Oh, this fifth-year senior is still working her butt off everyday and still try to make those gains,’ there is no end to the gains you can make here,” Osanitsch said.

Osanitsch is one of Quinnipiac’s three team captains along with Megan Conaboy and Haley Swartz. Osanitsch says that her blunt approach helps her lead the Bobcats.

“Yeah, I’ll rally the troops if I have to. I’m not afraid to yell at the team if I feel we are underperforming or not working together, those kinds of things,” Osanitsch said.

Osanitsch has entered Quinnipiac’s graduate school in the physical therapy program. She will have two more years of graduate school to follow in order to earn a doctorate in physical therapy. Although she is currently interested in prosthetic rehabilitation, she says she has not made any concrete decisions about what direction she wants to take that in.

“I’m kind of open to anything and I am not really cementing myself into anything into one area or one section,” Osanitsch said.

In the meantime, Main hopes to keep Osanitsch on the field for the entire season again. Osanitsch, on the other hand, says she hopes to help get the team back into the national tournament in her final season.

“I feel if I show up, work as hard as I can, and push the person next to me to do that, that person pushes the girl in front of her and then it kind of domino-effects all the way down the field until everybody is at a top performance level,” Osanitsch said.